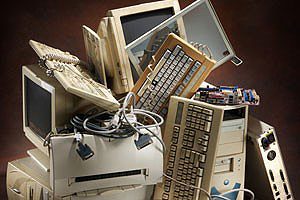 For a long time, large enterprises have depended on a planned obsolescence policy to deal with IT assets that have reached end-of-life. Unfortunately, this “buy-dump-buy” mindset is partly responsible for fueling a massive increase in global e-waste.

According to the World Economic Forum (WEF), approximately 50% of today’s e-waste is made up of computers, screens, smartphones, tablets, TVs and other devices. The WEF estimates that by 2050, the amount of e-waste could double to 100 million tons.

The crisis could accelerate given the COVID-19 pandemic, which has forced companies to make a sudden shift to mostly remote workforces. When individuals finally return to offices, companies will have to deal with getting rid of excess IT equipment that was purchased for remote employees. Will these devices be destroyed or will older equipment be replaced sooner than planned?  Either way, the potential exists for much of this used equipment to end up in landfills across the globe.

In this eWEEK Data Points article, Fredrik Forslund, vice president of enterprise and cloud erasure at Blancco, shares some takeaways from the company’s latest research, “Poor Sustainability Practices Enterprises are Overlooking the E-waste Problem.” The implications that are vital for enterprises to consider as they evaluate their corporate sustainability policies. Blancco’s report is based on survey responses from 1,850 senior leaders at enterprises with 5,000+ employees in the United States, Canada, U.K., France, Japan, India, Singapore, Australia and Philippines.

Data Point No. 1: Enterprises are failing to comply with their own sustainability policies.

Even with growing awareness about climate change and the devastating effects it will have worldwide, many organizations do not take the issue seriously nor do they seem to understand the important role industry plays in the growing e-waste crisis. This disconnect is apparent because Blancco’s findings show that while 83% of organizations have a Corporate Social Responsibility (CSR) policy in place, only a quarter (24%) of end-of-life equipment is being sanitized and reused.

The other 76% ends up being stored or tossed in a landfill.

Data Point No. 2: More than one-third of organizations physically destroy unused IT equipment because they falsely believe it’s better for the environment.

A lack of education and ownership of sustainability policies has led to the fairly widespread myth that destroying old equipment is more environmentally friendly than recycling and reusing. In reality, when electronics are improperly disposed of or added to a landfill, the toxic or hazardous materials they contain, such as mercury and lead, harms the environment and anyone who is exposed to them. Unfortunately, 39% of IT professionals surveyed worldwide (30% in the U.S. and Canada) are physically destroying outdated tech equipment. This percentage is even higher (52%) for government agencies.

Data Point No. 3: The execution of CSR policies suffers from a clear lack of ownership and communication.

Although dealing with end-of-life equipment is a key part of many organizations’ CSR policies (91%), the survey finds these policies are not being communicated or properly enacted across the businesses. More disappointing is that 24% of government organizations don’t even have a policy to communicate. The same is true for 25% of the transport and 25% of the advisory sectors.

Data Point No. 4: Companies are unnecessarily destroying thousands of assets each year.

Rather than destroying old IT hardware, organizations have an opportunity to employ an “erase and resell” policy that could earn them up to 2,000 carbon credits per year. One carbon credit is equal to one ton of hydrocarbon fuel, which is the equivalent of a 2,400-mile automobile drive in terms of carbon dioxide emissions, according to the Environmental Defense Fund. In addition to earning carbon credits to offset the waste they’re producing, organizations that erase and resell benefit from the goodwill they garner by pushing items into the circular economy – an economic system aimed at the continual use of resources – instead of the landfill.

Data Point No. 5: The growing problem of global waste is not just physical, it’s a digital problem as well.

More than 34 billion IT devices in the world today generate 2.5 quintillion bytes of data daily. When speaking at the most recent World Economic Forum, Antonio Neri, president and CEO of HPE, said that only 6% of the data generated is currently in use, which means that the other 94% goes to what he calls “the data landfill.” Organizations around the world are sitting on vast amounts of redundant, obsolete or trivial (ROT) data they don’t need, leading to the overconsumption of energy by data centers. Neri noted that 10% of the energy that’s being consumed worldwide is used to power massive data centers.

As the data shows, most organizations today have a lot of work to do to raise their “good corporate citizen” quotient. Given the dramatic and dire consequences the globe is facing due to climate change, companies must make it a priority to create corporate responsibility policies, communicate the policies and execute accordingly, and then evaluate and share the results on a yearly basis. Not only is the commitment to make a positive impact on the growing e-waste crisis good for the bottom line, it’s also a smart move from a branding perspective.

Customers appreciate and remember those companies that promote and support the social good, and sustainability is one policy that will reap rewards for generations to come.