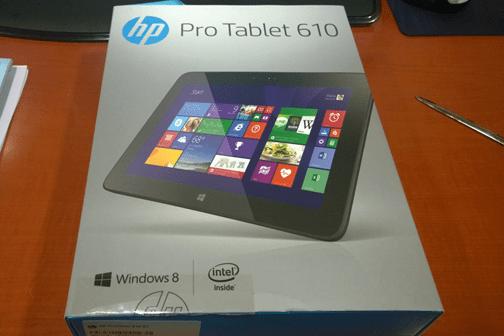 Hewlett-Packard as a company may be treading financial water, but its Personal Systems group is doing quite well at this time, thanks to increasing sales of its enterprise laptops, desktops and tablets.

One of those recent success stories is HP’s frontline Pro Tablet 610 Generation 1, which is finding a niche in all the enterprise markets following its debut this fall. Why? Because it has the tools, the power processor and all the other requirements needed for business: a 10.1-inch touch display, Windows 8 or 8.1 Pro (the same as new corporate laptops), a 64-bit 1.6 GHZ, quad-core Atom CPU, 4GB of RAM and 64GB of on-board storage.

It’s medium weight, fast and efficient, and the other features are true business-type specs for any tablet.

The tablet market up to now has been dominated by iOS and Google’s Android OS, but Windows always seems to find its share of the market. Humans are nothing if not creatures of habit, and Windows–let’s face it–is a habit.

While the 610 comes with Windows 8 or 8.1, it’s ready and waiting for upgrades to Win 10 when it comes out next year.

Oh yes, did we mention that the price is about half that (the highest-end at $649 and ranging down to $529, depending upon processors and storage capacity) of a comparatively equipped iPad? The second- and third-tier editions of the 610 G1 have a slightly less-powerful Atom processor, half the storage and random-access memory, and a consumer version of Windows 8.1, but they too are a good buy.

Windows for Laptops and Tablets

Apple may own two-thirds of the U.S. consumer tablet market at this time–and is making no secret that it wants to expand big-time into the enterprise market–but the fact is, most businesses are still Windows-as-a-first-language shops. So HP, already being a longtime Microsoft partner, is inherently in the correct lane when it comes to current business norms.

A Pro Tablet 610 weighs about 1-1/2 pounds and is less than a half-inch thick; those dimensions are competitive with the iPad and other competitors, such as Lenovo, Acer, Samsung and Dell. It feels solid but not heavy, and the touch-screen is sensitive–but not too sensitive–when telling it what to do; that sensitivity also can be adjusted.

The tablet’s 1920×1200-pixel high-resolution display is clean and bright, and it has an anti-smudge coating that keeps a good number of marks off the surface. While some people don’t mind smudges and fingerprints, personally they bother me; I’m always wiping the surface clean. With the Pro Tablet 610, you’ll find yourself wiping less. It provides a clear view from the front and both sides.

I was pleased that the display switches from landscape to portrait mode and back quickly–usually 1 second or less–because no one likes to wait for this.

Battery life is exemplary. The 610 lasts basically all day for me (an easy 8 hours while displaying less than 30 minutes of video). Note: It takes a long while for it to recharge–more than an hour, in my experience. For the record, the official battery life listed on the Pro Tablet 610 is 13 hours. If that is anywhere close to the truth, it is excellent battery performance.

The Pro Tablet 610 has a 2-megapixel, front-facing camera located above the screen for selfies; an 8-megapixel camera with auto-focus resides on the back for everything else. I don’t use tablets for taking many photos, but if you work for any number of industries that values sharp, large-size snapshots of objects, contracts or whatever, this will work just fine.

Don’t bother using Pro Tablet 610 for listening to music without headphones or separate speakers. Its stereo speakers are designed for voice and basic sound and offer no bass whatsoever, which is pretty standard for a business tablet. You can get Beats Audio sound with some HP laptops.

Pro Tablet 610 port lineup is as such: It has Micro HDMI and Micro USB 2.0 ports but it does not have a full-size USB 3.0 port, so that’s a clear disadvantage. There’s a separate DC power port to charge up; you cannot charge it through one of the USB 2.0 ports. The 610 has a microSDXC card slot that can take up to a 2TB storage card.

Nice feature: Because the microSDXC card slot is covered by a door, a user cannot pop the card out and lose it very easily.
In summary, HP has an uphill battle against Apple, Samsung, Dell and all the rest. But the Pro Tablet 610 gives it an awfully good chance to get in and take some market share right away.