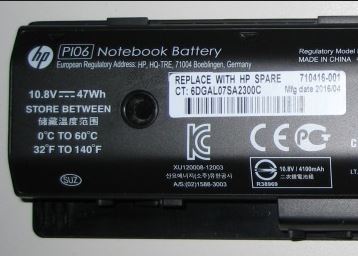 Samsung, which literally had to put out a number of fires last year when its Galaxy Note 7 phone batteries kept getting too hot and burning up, isn’t the only major IT device maker that’s been having trouble with too-hot-to-handle batteries.

Hewlett-Packard Inc., which designs and manufactures laptop, notebooks and workstation PCs, has determined that the lithium-ion batteries used in many of its notebook PCs are too dangerous to leave in the units. So, on Jan. 24, it recalled about 101,000 of them to be replaced.

The company said that the batteries can overheat, posing fire and burn hazards. It is requiring owners to replace them immediately.

HPI Last Had a Battery Recall in June 2016

HPI had a battery recall in June 2016 for the same reasons. Batteries previously identified as not affected in the earlier recall could be included in this expanded announcement, the company said. Users are urged to recheck their batteries against the models in this recall, HPI said.

Regarding incidents/injuries, HP said it has received one report of the battery overheating, melting and charring and causing about $1,000 in property damage.

One report might not seem enough to warrant the recall of 101,000 batteries, but in light of Samsung’s previous problem and a skittish consumer environment, HPI is taking no chances.

Details on the Recall

Sold at: Best Buy, Walmart, Costco, Sam’s Club and authorized dealers nationwide and HP’s website and other websites from March 2013 through October 2016 for between $300 and $1,700. The batteries were also sold separately for between $50 and $90.