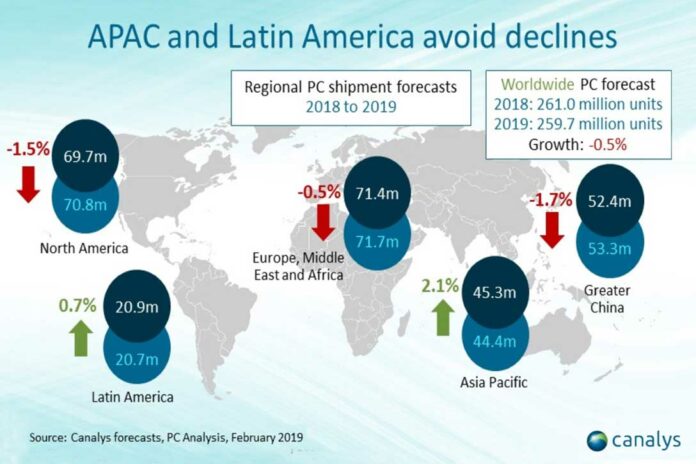 The ongoing shortage of Intel processors will continue to haunt the global PC market well into this year, with shipments of everything from desktops to notebooks declining in 2019 even as demand remains relatively steady, according to industry analysts.

Officials with Acer, which competes with Asus to be the world’s fifth largest PC maker, earlier this month said that the shortage of PC chips was a key factor in its revenues for February falling 5.2 percent year over year to $468 million and declining 3.1 percent in the first two months of the year.

Intel CEO Bob Swan admitted in September 2018 that the unexpected upswing in demand for PCs coupled with the rapid growth of the vendor’s data center-related businesses put a strain on its manufacturing capabilities and supply of 14-nanometer processors. Intel officials have said efforts to accelerate production of Xeon server and high-end PC chips will alleviate some of the shortages later this year, and the company also is preparing for the release of its long-awaited 10nm processors.

The efforts have included investing $1 billion in 14nm manufacturing sites in the United States and Israel, Swan wrote in an open letter last fall.

However, the CPU shortage will continue into later this year, hindering PC sales and opening opportunities for Intel rivals like Advanced Micro Devices, which is readying the release of its next-generation 7nm Ryzen PC chips.

Analysts from Gartner and IDC over the past several months have noted the shortage’s impact on the PC industry, with Mikako Kitagawa, senior principal analyst at Gartner, saying in a report in January that “just when demand in the PC market started seeing positive results, a shortage of CPUs … created supply chain issues.”

Kitagawa noted that PC shipments grew in both the second and third quarters last year but fell in the fourth quarter, adding that “the impact from the CPU shortage affected vendors’ ability to fulfill demand created by business PC upgrades. We expect this demand will be pushed forward into 2019 if CPU availability improves.”

That viewpoint was reiterated this week in a report by Canalys analysts, who said that shipments of desktops, notebooks and two-in-ones will continue to fall in the first two quarters, though the decline will slow in the second half of 2019 as the crunch on CPUs eases. Shipments in the second half will grow 0.4 percent over the same period last year, they said.

It also will fuel greater competition between Intel and AMD, according to Canalys analyst Ishan Dutt.

“Problems with Intel processors supplies are set to ease from Q3 2019, providing relief to the market in the second half of the year and setting the stage for a tussle between Intel and AMD,” Dutt said in the report. “The next few months will determine AMD’s long-term success as its reliance on Intel shortages comes to an end.”

Intel continues to hold a dominant position in the PC chip space, but AMD officials have said their market share and revenues continue to grow, with President and CEO Lisa Su saying in January that the company has increased market share over the past five quarters. Mercury Research analysts put AMD’s fourth-quarter market share for x86 PC chips at 10.6 percent in the third-quarter 2018.

Canalys’ Dutt said AMD, which is growing its efforts around Chromebooks, has benefited by growing share in entry-level PCs while Intel has focused on higher-end premium systems. Given that, AMD has seen strength in such regions as Asia Pacific and Latin America, where price-conscious consumers and businesses embrace such entry-level PCs, which is also a reason why those regions will not see PC shipment declines this year.

As Intel increases the chips in the pipeline as the year moves on, in such countries where AMD has gained share, “it will be vital to build up stronger retail, sales and support capacity to cement its position,” Dutt said.

Channel partners aren’t as optimistic about Intel being able to address the ongoing chip shortages, which Dutt said opens more opportunities for AMD. Among those PC channel players surveyed, 57 percent said they expect the Intel shortages to have a medium to severe impact on their businesses this year.

PC vendors also are making moves to grab more revenue. Dutt noted that Dell is investing in the SMB space, growing its direct sales staff dedicated to that market segment and pushing such products as two-in-ones toward commercial customers. It’s also improving the gaming systems in its Alienware and Inspiron lineups.

On the commercial side, HP is expanding its desktop-as-a-service (DaaS) offerings—which include Apple products—into Europe and building more dedicated hardware for such verticals as education and healthcare.