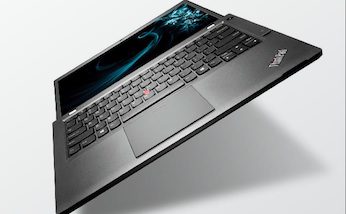 Lenovo took great pains in designing its newest ThinkPad, the T431. The computer maker undertook an extensive research initiative over nine months, across nine countries and in 11 languages.

“It wasn’t just surveys,” Alysia Baker, Lenovo’s worldwide product marketing manager, told eWEEK. “It included focus groups and was a very iterative process, where we would talk to customers, go back and revise, and get their thoughts again.”

Researchers spent thousands of hours shadowing users at work and at home, gathering feedback about how they interacted with their devices.

The results led to a number of improvements.

The T431s features a more streamlined interior—Lenovo adjusted the placement of the keys on the keyboard and slimmed the bezel around the display. The company also—after trying out various colors on Lenovo users and users of competing products—tweaked the color from soft-touch matte black to a new shade called Graphite Black.

Lenovo also gave it a carbon fiber top, to make it tough but light, and a magnesium exterior.

The T431s also has a new trackpad, which is an evolution of Lenovo’sTrackPoint and TouchPad. The new trackpad has a larger, smoother, more responsive multi-touch glass surface, and is optimized for the touch-friendly Windows 8.

Baker said that the increased real estate of the trackpad enhances the device’s Windows 8 functionality, as does a row of Windows 8 function buttons for things like adjusting the volume and the brightness and the microphone, and putting the laptop into airplane mode.

It runs the latest third-generation Intel Core i processors—up to an i7—has a 100 percent improved graphic performance with Intel HD Graphics, a 40 percent faster boot-up time, and a USB 3.0 port for transfers 10 times as fast as with a 2.0 port.

A built-in fingerprint reader can turn on the laptop with a swipe, there’s a 720p HD camera with Polycom Ready technology for better audio clarity during video calls, and WiFi, WWAN and Ethernet connectivity, along with Mobile Hotspot capabilities.

“It’s the single biggest design change that we’ve ever had. … We think it’s just a great product,” Baker said.

In a deeply ailing PC market, Lenovo has continued to post growth and to aggressively outpace the industry average. During the fourth quarter of 2012, it held a 15 percent share of the market to longtime market-leader Hewlett-Packard’s 16-plus percent share. More impressively, during the third quarter, according to Gartner (research firm IDC felt otherwise), for the first time in the company’s history it slipped ahead of HP, which posted a 16.4 percent decline, to Lenovo’s growth of 9.8 percent.

Gartner noted in a Jan. 14 release that while Lenovo fell back into the second-place spot, it experienced the best growth rate among the top five vendors, performing well, thanks to its expansion into the retail market and defense of its position in the enterprise space.

Lenovo will begin selling the ThinkPad T431s in April, starting at $949.