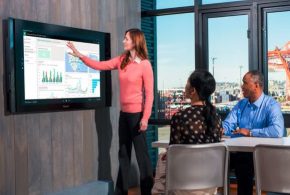 Microsoft has again pushed back the ship date on the Surface Hub, one of the biggest surprises to emerge from the company’s first major Windows 10 demonstration in January.

“Surface Hub devices will begin shipping in January 2016,” said the company in an update to a seemingly aggressive timetable the company set in June. The devices were originally set to start shipping next month in 24 markets, including the United States, the United Kingdom, Japan and a smattering of European countries.

“Based on the early interest we see, we’re tuning our manufacturing process to prepare for production at broader scale,” Hall said in a statement. “To do this, we are adjusting our product roll-out schedule to ensure we deliver a great customer experience and set our partners up for success.”

On the bright side, the extra months give the company’s partners, resellers and systems integrators more time to prepare for the Surface Hub’s arrival. “Microsoft authorized partners with strength and expertise in the areas of Audiovisual (A/V) and Unified Communications (UC) will be able to extend and enhance their core offerings with Surface Hub, capitalizing on new opportunities with new and existing customers,” Hall added.

More than a supersized version of the company’s Surface tablets, the Surface Hub is viewed by industry watchers as an aggressive move into the enterprise collaboration and conferencing market, pitting the Redmond, Wash., tech titan against established players like Cisco, Citrix and Polycom.

Surface Hub combines video conferencing and a digital whiteboard technology into a wall mountable, Windows-powered device that cuts the clutter associated with decking out meeting spaces with tech. When it finally ships, the device will be available in two versions, a 55-inch model with a resolution of 1080p for $6,999 and a massive 84-inch model with a pixel-packed 4K screen and a price tag of $19,999.

Microsoft is hoping enterprises won’t balk at those prices when they consider what the Surface Hub can replace, namely a projector, video conferencing system and speaker system among assorted technologies required to conduct a modern-day meeting. The touch-enabled device also supports pen input, promoting interactivity and attendee participation. Finally, since the hardware runs Windows 10, it integrates seamlessly with the company’s Office 365 software and cloud services ecosystem.

Finally, the company is striving to eliminate sources of friction while running or attempting to conduct meetings.

“Built in sensors help the device to wake up when you’re near and track your movement so cameras can follow you,” boasted Mike Angiulo, corporate vice president, of the Microsoft Devices Group, in a statement during the Surface Hub’s debut. “Meetings start instantly with a single touch. Meeting participants can share content wirelessly from Miracast capable devices, making meetings engaging and productive.”