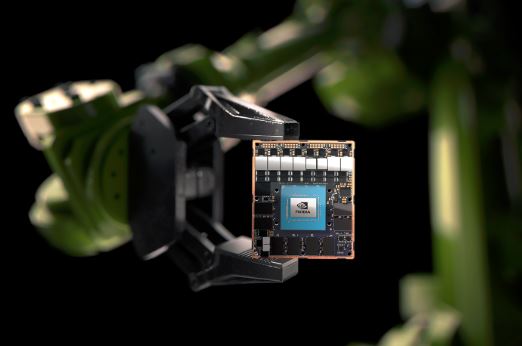 The Xavier Module is small enough to fit in the palm of your hand, yet it delivers what Nvidia calls “workstation performance” with very low-energy consumption (as little as 10 watts) in the range of what a clock radio requires. Developers can use the module to power a new generation of intelligent robots and other autonomous devices.

“It’s built to be an AI [artificial intelligence] server in a small form factor,” Deepu Talla, vice president and general manager of Autonomous Machines at Nvidia, said at the demonstration. “There’s nothing else like it in this category.”

Lots of New Apps on Display

Nvidia has already established itself as a major provider of chips and developer tools for autonomous car makers. Companies showed off a range of new applications, including robots, drones, an industrial vacuum cleaner and an autonomous grain cart from SmartAG that serves as a retrofit to John Deere tractors.

Rather than have to empty what the tractor collects in the field and stop operations, SmartAG’s AutoCart powers an autonomous grain cart that can be summoned by smartphone or tablet to pull up alongside the tractor and collect the grain. It can then be directed to unload the grain wherever it’s supposed to go, while the tractor keeps operating.

In a video demonstration of the product, SmartAG’s Quincy Milloy showed how the operator of the cart sees the direction it’s going on the tablet and also any objects to avoid in the field, including humans who are distinctly outlined in blue on the screen.

An Operating System for Robots

Brain Corp, another Nvidia partner, showed what it described as a standard operating system for robots.

“We believe robots are where computing was in the 1980s when PCs needed a standard operating system,” Jean-Baptiste Passot, vice president of software engineering and AI at Brain Corp, told eWEEK.

BrainOS is using Nvidia Jetson to power an autonomous vacuum cleaner called The Whiz from SoftBank Robotics. The Whiz can vacuum 1,500 square meters in three hours, moving along a route that a human needs to “teach” it just once. BrainOS gives The Whiz autonomous navigation and data collection capabilities tied back to a cloud-based reporting system.

While many of the applications shown weren’t new, analyst Rob Enderle said Nvidia is ahead of the pack in delivering “better, faster and cheaper” devices to power a new generation of autonomous devices.

No One ‘Close’ to Nvidia Right Now

“There’s no one close to what Nvidia is doing; it would take a breakthrough in quantum computing or some other technology to challenge them,” Enderle, principal analyst with the Enderle Group, told eWEEK.

Nvidia also showed off its DeepStream Software Development Kit for Jetson AGX Xavier. The DeepStream SDK offers streaming analytics that developers can use in multi-camera and multi-sensor applications to detect and identify objects of interest. In the case of autonomous vehicles, for example, this would include other vehicles, pedestrians and cyclists.