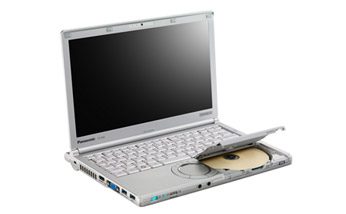 Panasonic has given a processing and battery power boost to its rugged business notebook line with its new Toughbook SX2.

Launched on Oct. 11, the SX2 is geared toward mobile professionals such as real estate agents, traveling nurses and field sales workers. The unit features a 3.3GHz Intel Core i5-3320M processor and 14.5 hours of continuous battery life, an increase over the 12.5 hours of standard battery life on the earlier Toughbook S10.

The processor features Intel Turbo Boost Technology, which enables CPU cores to run faster than a base operating frequency if they run below power current and temperature specification limits, according to Intel.

In addition, the SX2’s magnesium-alloy frame design makes the unit resistant to 30-inch drops on its base while powered on and a 12-inch drop on other faces when off, Panasonic reported. The unit also features a shock-mounted flex-connect hard drive. Panasonic demonstrated the durability of the SX2 to survive drops in an online company video.

These “business rugged” features allow workers to avoid worrying about dropping the unit. Fully rugged Panasonic units such as the Toughbook 31 can survive longer 6-foot drops.

The Toughbook models also can run Open’s SafetyPad software to allow for data reporting from an ambulance to a hospital.

The SX2’s pricing starts at $2,649. Panasonic has slimmed down the SX2 by 33 percent from previous models, according to the company.

Wireless connectivity includes WiFi and Bluetooth, which could enable medical devices such as glucometers as well as blood pressure and heart-rate monitors to be connected to the unit.

In addition, the SX2 features a 12.1-inch HD+ LED backlit display to increase readability for workers in low-light conditions, including emergency first responders and construction workers.

Panasonic has placed the SX2’s optical drive next to the touch pad below the keyboard. The unit also comes with two backward-compatible USB 3.0 ports.

“Technology enables many professionals today to work from virtually anywhere, but this freedom creates a new set of issues when users are not equipped with the right tools for the job—device failures mean frustration, lost productivity and revenue, plus substantial repair and replacement costs,” Kyp Walls, director of product management for Panasonic Solutions for Business, said in a statement.

For security, the SX2 includes a Trusted Platform Module (TPM) security chip. TPM is a security standard from the Trusted Computing Group that authenticates hardware and stores digital certificates, encryption keys and passwords.

The SX2 also features Absolute Software’s Computrace theft protection, which enables companies to track the locations of laptops by using a cloud-based console. Companies can also manage, recover and track data from this application.

In addition, the SX2 includes Intel Anti-Theft technology, a feature that allows IT administrators to lock down lost or stolen laptops. It requires a subscription from an Intel Anti-Theft service provider.

Panasonic recently rolled out several updates to its Toughbook line, including the semi-rugged Toughbook 53, which, like the SX2, features an Intel Core i5-3320M vPro processor