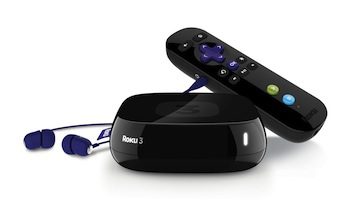 The battle for control of the living room through an all-in-one media content hub has been raging for some time, and this week Roku, the streaming platform for delivering video, music and games to the TV–and the first to offer Netflix streaming in 2008–has taken the wraps of the Roku 3, seeking to raise the bar with a revamped interface and an enhanced remote with a headphone jack for private listening.

The company claims it is the fastest, most powerful Roku streaming player to date, able to access more than 750 channels of movies, TV shows, sports, music and games. The Roku 3 is available in the United States through the Roku Website, Amazon and other online retailers for a suggested retail price of $99.99. It will also be available in retail stores nationwide beginning in April, a company release said.

The updated interface, which provides improved access to channels, will automatically roll out as a free software update in April to all current-generation Roku devices, including the Roku LT, Roku HD (model 2500R), Roku 2 HD, Roku 2 XD, Roku 2 XS and the Roku Streaming Stick. Roku also has a free app for Apple iOS and Google Android mobile devices that transforms a phone into a portable Roku command center.

The Roku 3 player also offers support for 1080p HD playback, has dual-band wireless capability, Ethernet and USB ports, and a microSD slot. Recently launched channels on the Roku platform include TWC TV, Blockbuster On Demand and iHeartRadio. The company said other channels would be launching soon, including Fox Now, PBS and PBS Kids.

“As Roku continues to build the largest selection of streaming entertainment, we are always exploring ways to improve the TV experience for our customers,” Roku founder and CEO Anthony Wood said in a statement.“Roku 3 introduces thoughtful new features that customers will love. The intuitive new interface makes it easy to find movies and shows quickly while the private listening mode is perfect for late-night streamers who don’t want to wake up the family.”