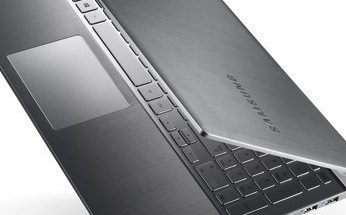 With this year’s Consumer Electronics Show right around the corner, computer makers are taking the wraps off their latest devices, including Samsung, which is upgrading and expanding the Series 7 Chronos Ultrabook at the event.

The company revealed two additions to its Series 7 PC lineup, the enhanced Series 7 Chronos, which delivers professional performance in a thin and light form factor, and the Series 7 Ultra, an Ultrabook with enriched computing power, graphics and touch capability.

The Series 7 Chronos provides enhanced processing power a new software solution RAMaccelerator designed to provide up to a 150 percent increase in speed for browsing and running apps by taking advantage of the existing memory.

The notebook also offers ten-finger multi-touch capabilities that allow the user to interact directly with the screen, as well as the touchpad and keyboard. Sporting a full aluminum body, the Series 7 Chronos also packs an Intel quad-core processor with up to 16GB of memory, up to 1TB of storage and dedicated 2GB external graphics into a slim chassis that measures 0.82 inches.

In addition, the Series 7 Chronos features a high resolution, full HD display JBL optimized speakers, enhanced graphics and an extended battery life of up to 11 hours. The notebook can also wake up in as little as two seconds and boot in under 12 seconds.

The Series 7 Ultra is Samsung’s Ultrabook offering aimed at multimedia users, and sports a full HD display, JBL optimized speakers and AMD graphics, all encased in a ultra-slim aluminum body. The notebook’s display is also brighter and wider than previous models and features a 178-degree viewing angle, as well as ten-finger intuitive touch capabilities.

With up to eight hours of battery life, the latest Intel Core i5 or i7 processors and up to 256GB solid state drive (SSD) of storage capacity provide, the notebook also features 4G Long Term Evolution (LTE) connectivity, three USB ports, as well as a LAN port and a slim security slot to help ensure the device is securely tethered.

“2012 was a definitive year for Samsung’s PC business – we expanded our lineup, taking advantage of the new form factors and consumer demand. This led to significant growth in the industry,” Samsung Electronics senior vice president of IT and mobile communications David Song said. “In 2013, we will continue to focus on innovation delivering products that fit into customer lifestyles while maintaining Samsung’s high-end design and performance standards. The new Series 7 Chronos and Ultra products are just two examples of what you can expect to see from us throughout the year.”