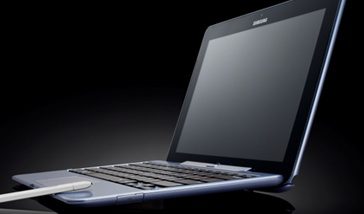 Samsung unveiled its family of PCs that would be optimized for Microsoft’s Windows 8 operating system, including mobile PC and all-in-one product lines. Samsung also offers a range of applications across devices, including Samsung Quick Starter, and applications for the S Pen styles, such as S Note and S Memo.

The Samsung ATIV Smart PC 500T is engineered for mobile users and allows them to switch between a traditional clamshell notebook PC and tablet PC, while the ATIV Smart PC Pro 700T, designed for on-the-go professionals with an Intel Core i5 processor, can also switch between a clamshell and tablet form factor. The ATIV devices are preloaded with S Pen optimized apps such as S Note, S Memo and S Cloud. With 1,024 levels of sensitivity, the S Pen is designed for intuitive content creation, and offers features, including handwriting-to-text conversion and varying thickness when drawing or writing, depending on the pressure applied.

For desktops, Samsung gave consumers a look at the Series 5 all-in-one (AIO), was designed to serve as a “kitchen PC,” with a keyboard and mouse that fit between the legs of the base to open up counter space and a slightly smaller screen size. The AIO will sport an Intel Core i3 processor and HD graphics, Bluetooth 4.0 technology, HD audio, and a 21.5-inch high-definition 10-point multitouch display. The Series 7 AIO recognizes hand gestures in addition to the 10-finger touch capability and sports a 23.6-inch or 27-inch HD display.

The latest Samsung PCs also feature exclusive applications, and all of the products have the ability to interact with other Samsung devices, such as mobile phones, tablets and TVs, through Samsung AllShare Play, which integrates the PC into users’ home or office ecosystems. Users can share content between their AIO and other Samsung devices on the same network, such as showcasing photos from their phone to the larger AIO display or share a document drafted on the desktops with their tablet and continue editing when mobile.

The PCs also feature SW Update for the latest software and drivers. Included within SW Update is Samsung’s Quick Starter feature, which adds a toolbar and start button to the Windows 8 interface, which provides users with a choice of interface and offers a familiar navigation scheme. In addition, SW Update includes AllShare Play for convergence across devices.

“Samsung has seen extraordinary growth in the mobile PC category over the past few years, and we’re now taking our success to the next level by connecting the PC to other devices in the home or office through our convergence technology, Samsung AllSharePlay,” Mike Abary, the company’s senior vice president of consumer IT product marketing, said in a statement.” The launch of Windows 8 provides an inflection point in the evolution of the PC. Samsung has always focused on pushing the boundaries of design to create truly remarkable products that consumers and businesses want. We’re confident that we will continue to lead the future with our thoughtful, powerful approach to the computing experience.”