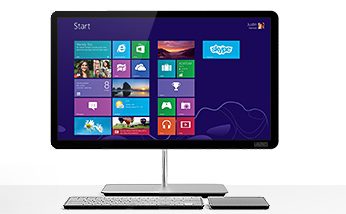 Display manufacturer Vizio announced the pricing and availability of its spring 2013 lineup of Windows 8 PCs, equipped with 10-finger capacitive touch displays on every model and with prices starting at $1,089.99 for the 14-inch Thin + Light notebook.

Each Touch PC features upgraded WiFi with 802.11ac, which is reportedly about three times faster than standard 802.11n. The PCs are also equipped with Microsoft Signature for Windows, which includes 90 days of free support; Windows Defender, an anti-virus security platform; and applications such as Windows Photo Gallery, Windows Movie Maker and Skydrive.

Advanced Micro Devices and Intel processor options for the 24-inch all-in-one Touch, 14-inch and 15.6-inch Thin + Light Touch PCs allow consumers to select a model based on their needs. The latest AMD A10 quad-core application processing unit (APU) with Radeon HD graphics is pitched at multi-taskers or gamers, and armed to deliver rich visuals and immersive gaming experience, while the third-generation Intel Core i7 quad-core processor with Intel Turbo Boost Technology focuses on high-performance, tackling demanding tasks and supporting applications with extra speed and maximum power.

Vizio, a company better known for its HDTVs than computing devices, began its invasion of the consumer PC market last year with the launch of notebooks featuring Intel Ivy Bridge processors, “premium materials” and the benefits of the Irvine, Calif.-based company’s HDTV heritage.

Sony, another television maker, is also relying on its display expertise to help make a name for itself in the highly competitive mobile market. The company has been hard at work expanding its Xperia smartphone and tablet family, which boasts HD displays powered by Sony’s Mobile Bravia Engine 2 and shares capabilities with Sony digital cameras. Near-field communication (NFC) technology also allows consumers to use the tablets and smartphones as remote controls for Bravia smart TVs.