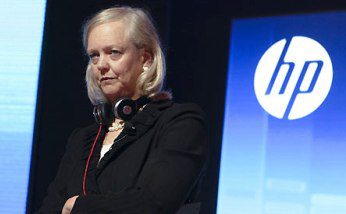 Even though Hewlett-Packard replaced Leo Apotheker in September 2011 after a mere 11 months as CEO, his influence is still impacting the company big time. It might continue to affect the company for a long time to come.

First, the good: HP’s profit margins have improved, and its software (up 14 percent) and storage businesses (up 60 percent) are growing. HP’s full-year fiscal 2012 net revenue was $120.4 billion, down only 5 percent from the prior year, despite a soft macroeconomy and all the internal turmoil. Those numbers all portend well for the future, if the company can get out of the hole in which it is mired.

Last Three Years Have Been Problematic

The stock was selling for $53.90 in April 2010, right before then-CEO Mark Hurd was forced to resign due to a personal-conduct issue with a female contract employee. The stock’s all-time high was $66.28 in January 2000.

There’s more, and this one’s big: HP was forced to take a whopping $8.8 billion “intangible asset impairment” charge for the $11.1 billion Autonomy acquisition in 2011 that Hurd and Apotheker had advocated, citing some serious accounting and credibility problems.

The company said in its quarterly report to the Securities and Exchange Commission that the accounting issues took place just before the acquisition and thus accounted for the majority of the charges in the quarter, which totaled more than $5 billion.

Among other things, Autonomy makes search engines that help companies find vital information stored across computer networks. Acquiring it was part of an attempt by HP to strengthen its portfolio of high-value products and services for corporations and government agencies.
Among the tricks used at Autonomy, CEO Meg Whitman said on a conference call to analysts and reporters, was that it had been booking the sale of servers as software revenue and claiming the cost of making the machines as a marketing expense. Revenue from long-term contracts also was booked up front, instead of over time, Whitman said.

Writing Down 80 Percent of Autonomy Payment

So, HP basically is writing down 80 percent of the value of the transaction, which it had predicted would bring HP to the forefront of the new cloud-based IT economy against competitors such as Oracle and IBM. The bigger question: Who vetted this deal for HP?

The answer: First, the HP board of directors, which is ultimately responsible for this train wreck. Second, Deloitte, which was Autonomy’s auditing firm. Third, KPMG, HP’s auditors, which audited Deloitte’s work. These are not insignificant names. Nonetheless, a whole pack of problems went uncovered before Apotheker and HP decided to part with $11 billion of the company’s hard-earned capital to annex the U.K.-based software company.

“I’m both stunned and disappointed to learn of Autonomy’s alleged accounting improprieties,” Apotheker wrote in a media advisory. “The developments are a shock to the many who believed in the company, myself included.”

Why HP Took an $8 Billion Charge for 2011 Autonomy Deal

Autonomy founder and former CEO Mike Lynch defended himself, telling Reuters that mismanagement of Autonomy by its new owners was to blame for the decline in its value.

Lynch said he was confident he would be absolved on any wrongdoing. He said he had not been notified by HP about the allegation before it was made public, nor had he been contacted by any authorities.
“We are shocked, this is a big surprise, it’s completely and utterly wrong and we reject it completely,” he said in the Reuters interview.
“We have not heard anything from HP, they have not been in touch and we don’t know what they are on about,” he said. “I fear that this is a bit of a distraction on the day when they produce their worse set of results in the 70-year history of the company.”

“She was brutally honest,” Gartner analyst and Vice President Neil MacDonald told eWEEK. “She basically said, ‘It’s not going to get better in 2012, it won’t get better in 2013; finally, you should see some results from our turnaround, from a financial perspective, in 2014.’ She put the bad news out on the table.”

MacDonald continued: “What she didn’t do, and likely could not because the investigation was ongoing at the time, was talk about Autonomy. This was the other shoe that was left waiting to drop.”

During this Thanksgiving week, the Autonomy shoe has now officially dropped.

Gartner’s team, like HP’s, had respect for Autonomy’s 15-year-old history and IT before the acquisition, MacDonald said, but there was a catch.

“[Autonomy founder] Mike Lynch ran a very tight ship at the top and was involved personally in nearly every decision that was made at Autonomy; he has a very strong personality, and it is unlikely that there was financial misconduct without his being aware of it,” MacDonald said.

That was one of the problems once Autonomy was acquired by HP, MacDonald said.

“You can’t scale that. If every decision has to go through one person, you can’t scale out to be a multibillion business within HP—if you’re still managed by one person,” MacDonald said. “After the acquisition in October 2011, he [Lynch] had a good six months [within HP], but he did not deliver results.”

Lynch, a former professor at Cambridge—where he came up with Autonomy’s platform to control, secure and store unstructured data in a usable way for line-of-business users—apparently shopped his company to Oracle and a few other companies before HP bought it.

Autonomy is a multifaceted IT provider that put itself on the global storage map by acquiring Iron Mountain’s digital archiving, e-discovery and online backup business for $380 million in cash in May 2011. At the time of the acquisition, Apotheker had described it as one of the “oldest and most established IT companies to compete successfully and profitably for new business in the cloud computing sector.”

What HP Needs to Do Now

Still, HP has a long history—73 years, to be exact—in business and has hundreds of thousands of customers all over the world. Despite the stock price and all the shenanigans involving its suspect leadership during the last decade, HP still has a lot of loyalty capital that it is spending to ride out its current problems.

“Aside from the Autonomy debacle, and though HP’s past quarter was fairly grim, we don’t expect the results to seriously impact the loyalty of many enterprise customers,” Pund-IT analyst Charles King wrote in his weekly advisory. “The 14 percent increase in software revenues suggest that that company’s strategy there is developing traction.

“What does HP need to do now? The goal is for HP to be transparent about what’s going on and to address any issues or insecurities those clients might have. Just as important: The company must do everything it can to manage the narrative around these events. Why? If it doesn’t, competitors will be more than happy to step in and do it for them.

“Finally, HP needs to be clear about where it’s going from here and what customers can expect from and during that journey. To date, Meg Whitman has proven that she’s capable of taking on unenviable tasks and making difficult, sometimes dreadful decisions,” King wrote.

“If she’s smart enough, tough enough and has time enough to bring the company back from this particular brink, her tenure will be remembered fondly by HP customers and shareholders alike,” he added.