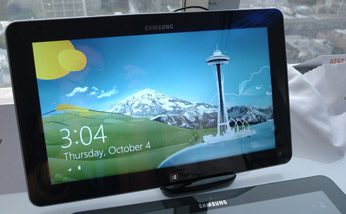 Excluding sales of Microsoft’s much-buzzed-about Surface tablet, the consumer Windows PC and tablet market didn’t get the boost it needed from the launch of Microsoft’s Windows 8 in the U.S, according to a report from research firm NPD Group.

Since the Windows 8 launch Oct. 26, Windows device sales have fallen 21 percent from the same period last year, according to NPD Group’s Weekly Tracking Service, which includes input from a panel of retailers. However, average selling prices (ASP) of Windows computing devices have jumped significantly in 2012. This year’s ASP over the past four weeks rose to $477 from last year’s overall ASP of $433.

The report also found that notebook sales, which have been weak through most of 2012, saw that trend continue, falling 24 percent from the same period last year. However, desktop sales have fared better this year, dropping just 9 percent. Windows 8 tablet sales have been almost nonexistent, with unit sales representing less than 1 percent of all Windows 8 device sales to date, according to the report.

Windows 8 notebooks have seen a nearly $80 rise in selling prices from the prior year, propelled by the strong performance of touch-screen devices and a solid uptick in the pricing on mainstream notebooks. Windows 8 desktop ASPs were also strong; selling prices rose nearly 10 percent, driven by the same factors as notebook sales, the report revealed.

“After just four weeks on the market, it’s still early to place blame on Windows 8 for the ongoing weakness in the PC market,” Stephen Baker, NPD vice president of industry analysis, said. “We still have the whole holiday-selling season ahead of us, but clearly Windows 8 did not prove to be the impetus for a sales turnaround some had hoped for.”

Since its launch, Windows 8, the latest version of Microsoft’s ubiquitous operating system, has captured 58 percent of Windows computing device unit sales, compared with the 83 percent Windows 7 accounted for four weeks after its launch.

“The bad back-to-school period left a lot of inventory in the channel, which had a real impact on the initial sell-through rates for Windows 8,” Baker said. “The strong performance of Windows 8 notebooks with touch-screens, where Windows 8 truly shines, offers some reason for optimism. These products accounted for 6 percent of Windows 8 notebook sales at an average price of $867 helping to re-establish a premium segment to the Windows consumer notebook market.”

The report comes on the heels of a speech on Nov. 28 by Microsoft CEO Steve Ballmer, who said that the company sold 40 million licenses for the new operating system in its first month of availability. However, Ballmer, speaking at Microsoft’s annual shareholders meeting, didn’t clarify whether the licenses were sold to original equipment manufacturers (OEMs) or to consumers who bought the OS on new Windows 8 computers.