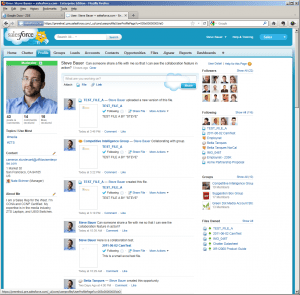 Salesforce Summer ’11 just released and the Chatter module got a ho-hum treatment when it needed a rocket ride. Business communication tools–especially from Salesforce.com–need to be more than an easy, breezy imitation of civilian social media tools.

Here’s my eWEEK review and what follows is what I’d like to see in the next iteration of Chatter.

1. Version control and reconciliation handled by the app, not the user. The current implementation of file collaboration imposes a heavy user tax in the form of users eyeballing the Chatter activity stream to see which version of the common file is still checked out. Short of facilitating live editing on a shared file (ala Google Docs) Salesforce should handle the “administrivia” so that users can do what they do best, which is get the content into shape. 2. Turn down the volume. Chatter is a very chatty system. In file collaboration, the default setting is to post a chat AND send an email to the user with whom a file has been shared. So, the first question is “why is Chatter using email?” The second question is “what’s a better way to do the same thing in Chatter?” The second question is far more interesting to examine. One way to handle this would be to make a “sticky” Chatter post. The post would hover at the top of the file recipients stream until it was acknowledged.

3. Automate change notes. In my tests, the second user, the “collaborator,” made changes to an Excel spreadsheet, then saved and uploaded the file, thus batting the content back into the originator’s court, so to speak. In that process, they were asked by Chatter to provide some information about what changed. I like the idea of categorizing “what’s new” with a selection list with options like, content, format, and corrections noted. Then it would be easy to see at a glance that this version of the file contains content changes or format changes, etc. The applications themselves have very nice ways to show revisions, and most users should be using those features if they are collaborating on the content of the file. And the last thing I want to do is make the changes in the file and then summarize them in the change log.

I’m hopeful that subsequent versions of Chatter will go beyond merely adding Twitter or Facebook-like features to the Salesforce platform. Trusted, secure, enterprise-oriented communication has specific qualities that are different from personal social media. To use a network analogy, Chatter should be more like TCP (guaranteed packet delivery) and a great deal less like IP (best effort).