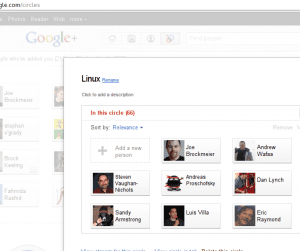 Thanks to an early invite to the service, courtesy of my colleague Clint Bolton, I’ve been testing out the service for most of the time it’s been live. Based on the time I’ve spent with the service so far, here are my impressions of Google+.

Using Google+ starts with wrangling an invite to the service and creating a Google Profile account, if you don’t already have one. Google Apps accounts won’t work for the service at all, though Google has said they’re working on this.

There’s no separate version of the app for Android tablets. The single app version works on smartphones and tablets alike, though, on the tablet, the app has that ill-fitting, stretched out look. Also, there isn’t yet any iOS version of the app, although I’ve heard there’s one awaiting approval by Apple.

Perhaps more interesting at this point are the ways that you don’t access Google+. There are no public APIs for the service, and no RSS access, so there isn’t any way to interact with the service through a third party client yet, unless you count email notifications.

Similarly, there’s no way to pipe posts into Google+ automatically, such as by pointing an RSS feed at your account–a common practice on Twitter, Facebook, or on Google’s own Buzz.

+1 for Sharing & Discussion, -1 for Reading & Searching

Google+ is focused squarely on giving users control over how they share their information, with apparently little focus on how others are to consume this information. This difference in focus is the biggest difference between Google+ and other services such as Facebook or Twitter at this point.

The most prominent feature of Google+ is the circle. Where in Twitter you follow, and in Facebook you friend, in Google+, you drop people into one or more circles (Friends & Following are two of the suggested circle defaults). When you share information on Google+, you select one or more circles with which to share. You can also opt to share with single users or with the public at large.

This sharing control should prove valuable for those who’ve wrestled with directing different sorts of information to different crowds. For instance, I tend to post techy sorts of things to my Twitter account and family and friend sorts of things to Facebook. On Google+, I could accomplish the same sort of separation on a single service.

Where Google+ Circles don’t prove particularly helpful is with filtering your incoming share-streams. For instance, the “Linux” circle that I created and populated with people who work on or write about Linux and open source looks pretty much the same as my omnibus stream: lots of pictures and random comments and tech news re-shares, and most of it not particularly Linux or open source-related.

For now, nearly all topic filtering is the responsibility of the sharer, and requires that the sharer create a topic-based group, figure out a way to publicize that group, and either guess which people would like to see the filtered information, or field and carry out add requests one by one.

Also annoying on the information consumption front is the apparent lack of any intelligent stream filtering — all posts are bubbled up to the top of your stream when someone adds a new comment, and while it’s possible to mute particular entries, someone in one of your streams need only re-share an item to bring it back from the dead.

Similarly, there’s no way to search through your stream, so even as zombie Robert Scoble posts return again and again from the dead, that interesting link or bit of commentary you just looked away from may prove very difficult to locate.

Looking Ahead to a Google++

I expect that Google will nail the missing search functionality, as well as develop something akin to Google Reader’s “sort by magic feature” for more intelligently ordering one’s stream. Also, it seems that a better solution for topic organization should be possible (dare I mention tagging?). What I’d really like to see from Google+ moving forward, however, is more openness.

Right from its launch, Google emphasized how Google+ users could walk away from the service, while downloading all of their shared information in a neat bundle. That’s great, but the sort of openness I’d like to see from Google+ would be less of a take it or leave it proposition than a system that’d support federation between different services.

Certainly, a Facebook or a Twitter might be slow to open up to this sort of federation, but Google could work with smaller services, such as Identi.ca, which is based on the open source Status.net, to demonstrate federation in action, and apply pressure for better-established services to open up, as well.

And, if you’re looking for a Google+ invite, drop me a line and I’ll try and send you one.