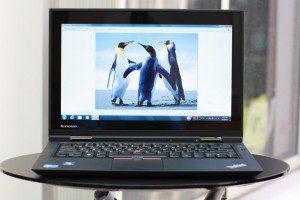 The Lenovo ThinkPad X1 13.3-inch laptop can be seen as Lenovo’s response to the MacBook Air. However, the heavier, angular and much more capable X1 should be considered on its own merits for business users who want a durable, sleek and portable system.

For eWEEK Labs images of the Lenovo X1 in action, click here. In my eWEEK review I noted that “The Lenovo business-class system has a number of ThinkPad firsts including a bright, 13.3-inch display fronted with Corning Gorilla Glass. The battery charging and management system is now equipped with Lenovo’s RapidCharge technology that can get a dead battery to an 80 percent charge in 30 minutes.”

The other test I perform, but rarely write about is a sanity check that I do with out IT guy. I usually show Bill a new laptop and get his perspective as someone who has to keep these mobile devices on the road and running. Bill always looks at the bottom of a laptop first. “Yep, this is where you get to the drive, memory, keyboard…” He noted that the X1 was pretty standard in that regard and then went on to look at the other do-dads on the system. I value Bill’s take on laptops because he brings business computing back to the nuts and bolts. If a user needs help, can I fix this system?

The rest of my review goes on to talk about the usual tests of power, CPU and general suitability. The bottom line is that the Lenovo ThinkPad X1 is “close enough” in thinness and lightness and miles ahead when it comes to compute, storage, ports and maintenance. To the extent the comparison of the ThinkPad X1 to a MacBook Air is apples-to-oranges is the result of the ThinkPad being far better suited for business use.