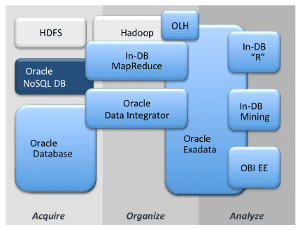 At its Oracle OpenWorld 2011 conference this week, database giant Oracle gave the burgeoning NoSQL database market a shot in the arm, with the announcement of its own NoSQL database product.

During my research for a recent eWEEK feature on the topic, I noticed that the marketing materials for the various NoSQL contenders contained what seemed like veiled references to Oracle and its flagship database as the one size fits all solution into which organizations were attempting to shoehorn too many of their applications.

Certainly, these depictions weren’t lost on Oracle, which offered up some counterfire collateral in the form of a May 2011 whitepaper entitled “Debunking the NoSQL Hype.” (hat tip to Wired for pointing out the Google cache link to this paper, which is no longer available on Oracle’s site)

Competitively speaking, Oracle is almost certainly more valuable to NoSQL incumbents as member of the non-relational database fellowship than it was as a relational database foil (which of course it still is). The heads of Apache Cassandra sponsor DataStax, of MongoDB backer 10gen, and of CouchDB supporter Couchbase have each issued welcoming blog posts to Oracle, all citing the validation that the Oracle announcement represents.

Oracle’s NoSQL Database is not yet available for download, but I spent some time with an Oracle whitepaperthat outlines the product. As with some other NoSQL database products, Oracle NoSQL Database will enable administrators to strike their balance between data consistency vs. availability, and to determine across what number of nodes to replicate data to guard against node failure. Oracle is presenting its new database as fitting neatly into an existing Oracle-based infrastructure — I’ll be interested to see how that plays out once customers get their hands on the product.

The new database is built atop the Java version of Oracle’s BerkeleyDB, a key-value data store on which Oracle has layered services supporting scale-out over large numbers of nodes. A commenter on DataStax CEO Billy Bosworth’s post on the Oracle announcement pointed out a January 2011 post from Oracle’s Gregory Burd pointing out that BerkeleyDB, on its own, didn’t qualify as a NoSQL database, and laying out some of the capabilities that would have to be added for the library to make the grade.

The post ends with a somewhat cryptic, “Why isn’t Berkeley DB already a NoSQL solution? Why aren’t we working on it? Why indeed…” which makes more sense following the product announcement, and makes the company’s at first glance abrupt NoSQL change of heart seem less abrupt in retrospect.