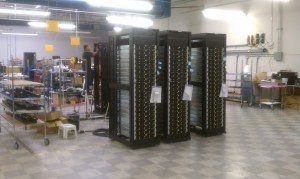 [WP_IMAGE]I think Fremont, Calif. counts as being part of the Valley, so I was shocked to find out that Penguin Computing has an assembly line there. People actually assemble racks of high performance Penguin designed computers, along with high speed storage and network interconnects for both cloud providers and private data center users.As part of my on-site visit this morning, I also learned a bit more about Penguin Computing On Demand (POD), which enables a kind of IaaS/PaaS hybrid capacity on demand offering for customers already using Penguin hardware.But let’s get back to the assembly line. Penguin builds and deploys HPC (High Performance Computing) systems. Usually by the rack, and usually pre-configured to exact customer specifications. I got to watch as workers assembled server systems and readied several racks for customer deployment.As a niche player, Penguin supplies HPC systems to all sorts of companies and organizations running applications that need each computing cycle to count. Virtualization to maximize hardware utilization isn’t a big deal in this world. Compute aggregation is. As such, while Penguin understands and uses open source virtualization tools, the focus is on making as much computing power as possible available for the smallest amount of money.I talked with Charles Wuischpard, President and CEO of Penguin Computing. He told me that Hadoop (read Big Data) projects were coming in from customers. These projects need as much compute power as possible while also paying attention to the bottom line. Today, Penguin can build 1U systems with 64 CPU cores. Company officials didn’t tell me what the “dead on arrival” rate was for racked-and-ready Penguin HPC systems. They did tell me they have a zero-tolerance policy for faulty RAM and that all DIMMS are checked and tested before being placed in service.Based on my facility visit, I can say that Penguin has the hallmarks for a scrapy, waste-not/want-not, spartan approach to running the business. That kind of lean and mean approach, along with Penguin’s open door, nothing off-limits approach to my tour left me with a feeling that I’d consider their hardware for an HPC project.Two words (or so) on POD. I got a demo and the bottomline is this. Customers can use command line tools to access HPC clusters in a scheduled way (on demand in the sense that you don’t have to buy and take delivery of a rack of Penguin equipment). I haven’t spent any time with the service, so I’ll say no more. Those interested can start here to get more information.