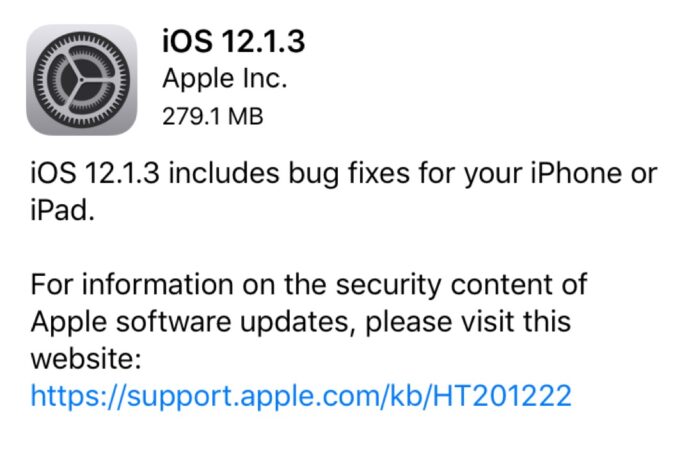 Apple released its first security updates of 2019 on Jan. 22, providing patches for multiple vulnerabilities across its iOS mobile and macOS desktop operating systems.

The new updates include iOS 12.1.3 for Apple’s iPhone and iPad mobile devices, watchOS 5.1.3 for the Apple Watch and Security Update 2019-001 for macOS High Sierra. The patched vulnerabilities include privilege escalation, information disclosure and code execution flaws, which could potentially expose Apple’s users to risk.

Among the most impactful vulnerabilities patched by Apple is the CVE-2019-6224 flaw that could have enabled a remote attacker to start a FaceTime call. The FaceTime flaw was discovered by Google Project Zero Security Researcher Natalie Silvanovich; Apple has fixed the flaw with improved memory handling.

The new security updates from Apple are the first patches since December 2018, when Apple also fixed a high-impact flaw in FaceTime. That flaw involved a passcode bypass identified as CVE-2018-4430 that could have enabled an attacker to bypass the iOS passcode.

All six of the kernel issues were reported to Apple by researchers from Google Project Zero; Apple also gave the Qihoo 360 Vulcan Team with credit for CVE-2019-6225. The impact for the six kernel vulnerabilities include arbitrary code execution, privilege escalation and memory corruption.

The kernel isn’t the only shared component across Apple’s operating systems that was patched—the Bluetooth component in both iOS and macOS also was patched for a vulnerability.

“An attacker in a privileged network position may be able to execute arbitrary code,” Apple warned in its advisory for the flaw identified as CVE-2019-6200. “An out-of-bounds read was addressed with improved input validation.”

In any given Apple update, patches for the WebKit browser rendering engine and the Safari web browser are typically prominent and the January 2019 Apple updates are no exception.

Among the interesting flaws patched in iOS is one for the on-screen keyboard component identified as CVE-2019-6206. According to Apple, the password autofill feature in iOS could have filled in passwords, even after they were manually cleared.

“An issue existed with autofill resuming after it was canceled,” Apple’s advisory stated. “The issue was addressed with improved state management.”