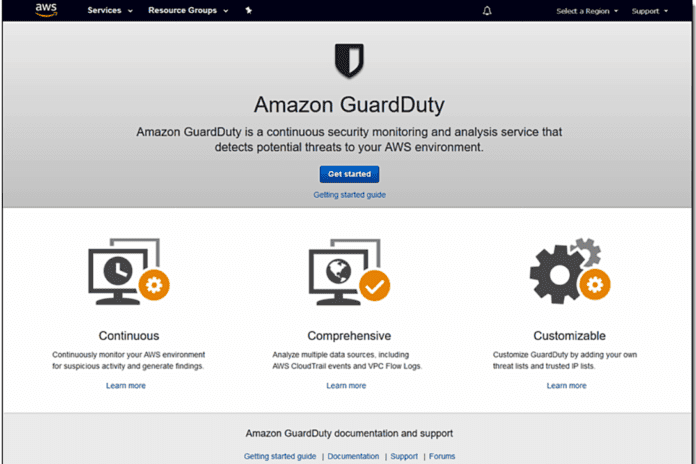 The GuardDuty service is enabled via the AWS Management Console that helps cloud users to manage their deployments. The GuardDuty system analyzes API calls made to running virtual resources in a customer’s account, to help detect anomalous activity that could be indicative of a potential security risk.

“We designed Amazon GuardDuty to be so simple and cost effective that turning it on would be an easy choice for every AWS customer, regardless of their security expertise or the existing security services they use,” Stephen Schmidt, Chief Information Security Officer, Amazon Web Services wrote in a statement. “Amazon GuardDuty intelligently identifies hard-to-detect threats that might slip through the cracks of other security products and easily scales to meet the needs of any organization, whether they have two AWS accounts or two thousand.”

“GuardDuty operates completely on AWS infrastructure and does not affect the performance or reliability of your workloads,” Jeff Barr, chief evangelist for AWS wrote in a blog post. “This clean, zero-footprint model should appeal to your security team and allow them to green-light the use of GuardDuty across all of your AWS accounts.”

Another key integration point for GuardDuty is with the AWS Lambda serverless service. With Lambda, GuardDuty users can automate threat remediation based on alert conditions.

“With GuardDuty, when an instance is suspected of having data stolen the service will alert you to be able to automatically create an access control entry restricting outbound access for that instance,” the AWS GuardDuty service page states.