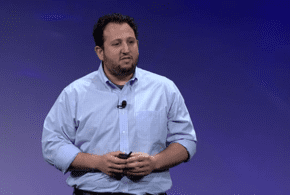 While Cisco is well-known as a leader in the networking industry, the fact that the company has a very large security business unit is perhaps sometimes overlooked. Cisco’s security business is one that David Ulevitch (pictured) is aiming to help promote and advance, as he becomes the Security Business Group Leader at Cisco.

Cisco CEO Chuck Robbins congratulated Ulevitch on his new role in a Twitter message on December 8. Ulevitch joined Cisco in August 2015 after OpenDNS which is a company he founded in 2005, was acquired by Cisco in a $635 million deal.

“It has been a fun 16 months,” Ulevitch told eWEEK about his experience at Cisco thus far. Part of that fun has been derived from the talented group of people he gets to work with in the Cisco security business unit and another part is the simple fact that business is going well.

Ulevitch noted that he recently spoke with a financial analyst that covers the security industry and asked the analyst why Cisco wasn’t being covered. The analyst told Ulevitch that Cisco was in fact being covered, but as a networking company. Ulevitch said that a key focus for Cisco is to make sure that financial analysts and the market as a whole, take note of the size and capability of Cisco’s security business unit, which is noteworthy on its own merits, aside from Cisco’s networking assets.

Ulevitch’s company OpenDNS has been integrated into Cisco’s overall product lineup over the course of the past year. He said that OpenDNS as a business was growing quickly when it was acquired by Cisco, and it has accelerated since then. OpenDNS now has direct integration with Cisco’s Advanced Malware Protection (AMP) and ThreatGrid technologies, among others. The Cisco AMP technology was first announced in February 2014 and benefits from capabilities Cisco gained from its $2.7 billion acquisition of SourceFire in 2013. Cisco acquired ThreatGrid in 2014, bringing malware analysis and threat intelligence capabilities.

“Cisco has a broad portfolio of security products,” Ulevitch said.

Rather than just having siloed products, Cisco’s goal is to provide intelligent integration. For example, if a Cisco customer has ThreatGrid, which provides a malware sandbox for analysis, and also has OpenDNS Umbrella, then if the sandbox detects a threat it can update OpenDNS to block the new threat.

While Cisco’s security group has integrations across its various products, the overall architecture has an open approach that enables integration with non-Cisco products as well.

“We actually have a partnership in place with FireEye and with Check Point around telemetry and enforcement with OpenDNS Umbrella,” Ulevitch said. “We have threat intelligence partnerships with ThreatQuotient as well as a number of other vendors.”

OpenDNS already has a massive data set that it can pull from, thanks to its consumer business which has 65 million daily active users. Those users help Cisco to understand traffic patterns and identify potential risks.

“If you don’t have a great product, customers aren’t going to buy your product,” Ulevitch said.

Cisco has been building, acquiring and integrating multiple technologies over the last several years to enable a solid security product portfolio. In Ulevitch’s view, Cisco’s security architecture provides organizations with increasing value as they deploy additional components of the integrated architecture. He added that Cisco really wants to make sure customers stick with Cisco and the way to do that is to make sure that organizations have an effective security posture.

“One thing I’d really like to see is for the rest of the market to realize is that Cisco is not just a networking company but is one of the largest security companies in the world,” Ulevitch said.