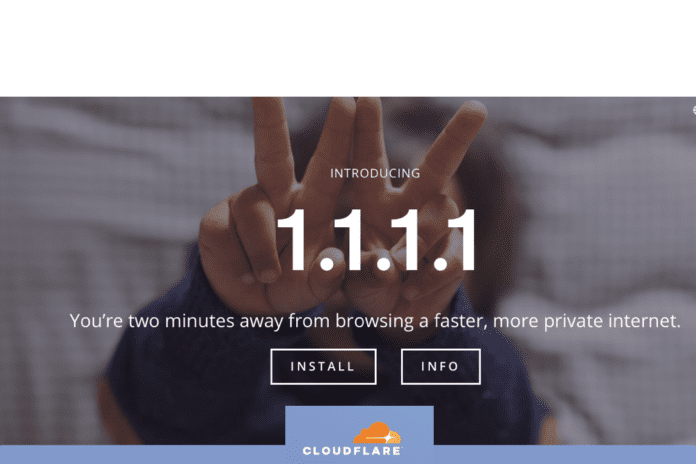 Cloudflare is the latest vendor to offer consumers a freely available Domain Name Service that aims to help accelerate and secure internet traffic.

On April 1, Cloudflare announced the debut of its 1.1.1.1 DNS resolver in partnership with APNIC (Asia Pacific Network Information Centre) Labs. With the 1.1.1.1 service, Cloudflare is providing a public DNS resolver that is enabled by Cloudflare’s global anycast network, which is powered by a set of 149 data centers around the world

“The insecurity of the DNS infrastructure struck the team at Cloudflare as a bug at the core of the internet, so we set out to do something about it,” Matthew Prince, CEO of Cloudflare wrote in a blog post. “Given we run one of the largest, most interconnected global networks—and have a lot of experience with DNS—we were well positioned to launch a consumer DNS service.”

A DNS resolver helps to ‘resolve’ or connect IP addresses to domain names. Most consumers get DNS resolution from their internet service provider (ISP) as part of standard connectivity services. The challenge is that not all ISPs are fast and few are globally distributed. The other challenge with regular DNS resolution is that queries sent by end-users to a DNS resolver can potentially be monitored by ISPs and others, which represents a privacy risk.

“DNS inherently is unencrypted so it leaks data to anyone who’s monitoring your network connection,” Prince wrote.

With the 1.1.1.1 service, Cloudflare is integrating support for a pair of security enhancement to standard DNS resolution. The two protocols are DNS-over-TLS (Transport Layer Security) and DNS over HTTPS, which both transmit DNS queries over an encrypted data link.

“The DNS resolver, 1.1.1.1, is also supporting privacy-enabled TLS queries on port 853 (DNS over TLS), so we can keep queries hidden from snooping networks,” Olafur Gudmundsson wrote in a blog post. “Furthermore, by offering the experimental DoH (DNS over HTTPS) protocol, we improve both privacy and a number of future speedups for end users, as browsers and other applications can now mix DNS and HTTPS traffic into one single connection.”

Cloudflare claims in its blog posts that the 1.1.1.1 service is potentially faster than Google and OpenDNS. Cloudflare did not specifically identify Quad9 in its announcement. According to multiple reports however, Quad9 is at least as fast as the Cloudflare 1.1.1.1 service.

Regardless of whether 1.1.1.1 is the fastest service for DNS resolution, it’s relatively easy for anyone to try it out. The 1.1.1.1 site provides full instructions and it’s as simple as changing the DNS server entry in the settings section of Windows, macOS, Linux, IOS, Android devices as well as directly on routers.