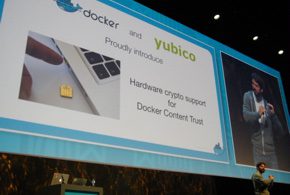 BARCELONA, Spain—As Docker container adoption grows, so too does the need for robust security. Today at the DockerCon EU conference here, Docker announced several new security-focused efforts, building on existing security that Docker has been pushing this year.

During the opening two-hour general keynote session, Docker founder Solomon Hykes emphasized that developers do care about security, but it’s important that security is actually usable.

“You can give developers the most secure tools in the world, but if the tools get in the way, they won’t use it and the result is unusable security, which is really not security at all,” Hykes said. “By providing usable security tools, we can move the needle on improving security for everyone.”

Docker’s foray into security tools got its first big push in August, when Docker Content Trust debuted alongside the Docker 1.8.0 release. Docker Content Trust makes use of the open-source Notary project, which aims to enable secure updating by way of authenticated and signed application images.

Part of the Content Trust approach relies on encryption keys, which are now being hardened further. Hykes announced new experimental support for hardware encryption with Yubico USB keys. Going a step further, Hykes and Docker actually gave all attendees of the DockerCon EU keynote their own key.

“We looked for the best hardware cryptography we could find,” Hykes said.

In an interview with eWEEK, Nathan McCauley, director of security at Docker, explained that the Yubico technology is all about hardware encryption and not so much about two-factor authentication. Yubico builds USB keys that are compliant with the FIDO Alliance Universal Second Factor (U2F) specification. The Yubico key Docker uses is a hardware-encrypted token that never reveals the private root encryption key that is used to sign an application image.

The hardware encryption support is currently in the experimental branch of Docker, and it could land in the Docker 1.10 release later this year or early 2016, according to McCauley.

Nautilus has actually been running for the last two months on Docker Hub to help protect a number of official application images. Without anyone really knowing about it and no public reveal until today, Nautilus has already helped to secure 74 million downloads (referred to as “pulls”) from the Docker Hub, according to Hykes. Moving forward, the plan is to make Nautilus a self-service capability that anyone can run for application images.

Finally, Docker is set to improve security visibility and control by supporting user namespaces. Docker itself has long supported Linux namespaces, which provides policy for processes running on top of Linux such as the Docker Engine. Application containers in turn run inside of the Docker Engine, where regular namespaces do not have full visibility. McCauley explained that with user namespaces, there will now be improved options for visibility as well as control for individual applications and processes that run on Docker.