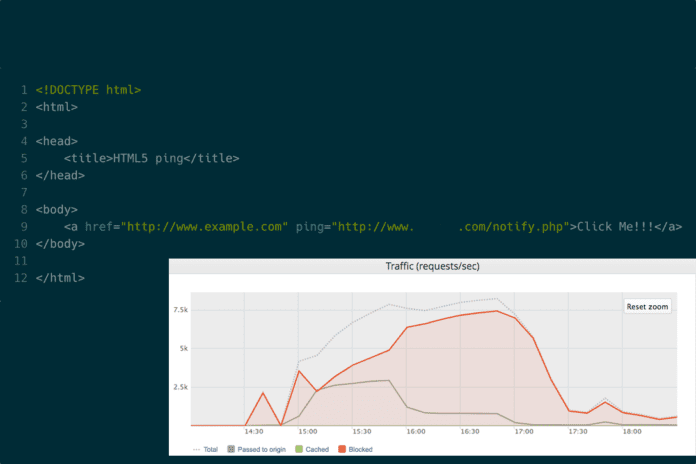 Security firm Imperva reported on April 11 that it has discovered a campaign where hackers abused the <a> tag ping HTML5 attribute in a DDoS attack that generated 70 million requests in four hours. The ping attribute is intended to be used by websites as a mechanism to notify a website if a user follows a given link on a page. Typically, a ping is a single action, but Imperva discovered that hackers have found a way to amplify the ping into a more persistent data flow, triggering the DDoS attack.

“The attacker, probably using social engineering, forced users to visit a website that contained malicious JavaScript,” Vitaly Simonovich, security researcher at Imperva, told eWEEK. “This script generated links with the target site in the ‘ping’ attribute and clicked it without personal involvement of the user. Auto-generated clicks reflected as ping back to the victim, continuously, the entire time the user stayed on the webpage.”

Imperva’s analysis of the attack explained that when the user clicks on the hyperlink, a POST request with the body “ping” will be sent to the URLs specified in the attribute. It will also include headers “Ping-From,” “Ping-To” and a “text/ping” content type.

“We observe DDoS attacks daily,” Simonovich said. “We discovered this attack last month. However, when we looked back in our logs, we noticed that the first time the attack occurred on our network in December 2018, it was using the ping feature.”

The attack that Imperva found was able make use of 4,000 user IPs, with a large percentage of them from China. The campaign lasted four hours, with a peak of 7,500 requests per second (RPS), resulting in more than 70 million requests hitting the target victim’s website.

How the Ping Attack Overwhelms a Server

A simple ping on its own is not enough to disturb a web server and, in fact, for basic availability web servers are regularly hit with ping requests. Ping requests are also low bandwidth and would not likely be able to constitute a volumetric DDoS attack, which aims to overwhelm the available bandwidth of a target server.

The DDoS attack discovered by Imperva, however, was not a basic ping and, according to Simonovich, could impact a web application server in a couple ways:

“The attack is performed on the application layer aimed to clog server resources by processing several HTTP requests,” Simonovich explained. “As such, attack bandwidth is not the weakest resource in the chain, but CPU or memory of the server.”

He added that 7,500 RPS is far from the most powerful application DDoS attack, which can reach 100,000 RPS and more, but it is enough to deny availability for a midsize website.

There are several things that organizations can do to minimize the risk of a Ping DDoS attack.

Imperva recommends that organizations that do not need to receive ping requests on a web server block any web requests that contain “Ping-To” and/or “Ping-From” HTTP headers on the edge devices (firewall, WAF, etc.). DDoS services, including the one that Imperva offers, also can be employed to help limit risk.

“Attackers are constantly looking for new and sophisticated methods to abuse legitimate services and bypass mitigation mechanisms,” Simonovich said. “Utilization of the ping functionality is a good example of this, especially since most of the browsers by default support it. The challenge that attackers are facing is how to force legitimate users to visit the malicious page and stay on this page as long as possible to make the attack run longer.”