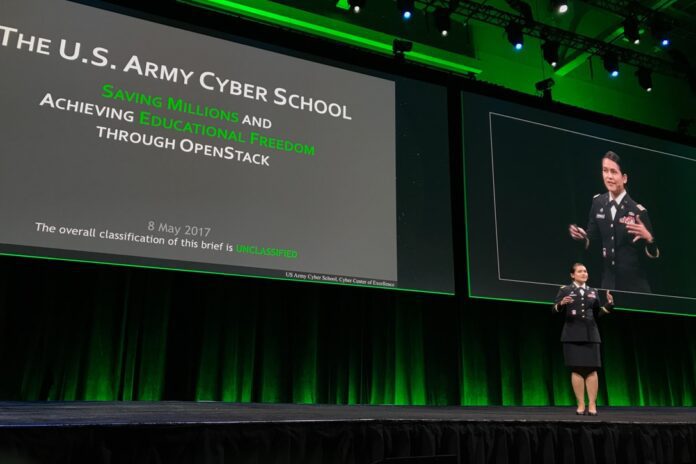 BOSTON—The open-source OpenStack cloud platform is now being used to help train the next generation of cyber-warriors. At the OpenStack Summit here May 8, officers from the U.S. Army Cyber School explained how they are using OpenStack to train soldiers to fight in the cyber-domain.

Major Julianna Rodriguez, director, and Chris Apsey, deputy director of the Cyber Technical College at the U.S. Army Cyber School, detailed their activities in a keynote as well as a late-day deep-dive technical session titled “Saving Millions and Achieving Education Freedom Through OpenStack. “

Rodriguez explained that the U.S. Army Cyber School trains more than 500 students every year. Individuals are trained in problem solving within the cyber-domain of military activities. That domain is about defending assets from being manipulated by attackers as well as having the capacity to act against hostile actors.

In the past, the Cyber School had a somewhat bulky process of updating the courseware used to train soldiers. Rodriguez said the legacy approach took at least a week and sometimes months for any changes to be made. Every change required written requirements and then was followed by a formal change request implementation. With OpenStack, that’s now no longer the case.

“Everything is now done in git, and what used to take weeks and months now takes only minutes and hours,” he said.

In the everything-as-code GitHub flow model, there is a master branch of code that can be branched by an instructor or developer to make additions. Those additions can be reviewed and discussed and then, if appropriate, merged back into the master branch, providing new code and capabilities.

“We apply DevOps concepts to everything we do,” Apsey said. “It lets the force stay constantly abreast of new developments.”

The path to the Cyber School’s OpenStack-based training platform was not a straight one as government procurement policies can be challenging. The Cyber School has code-named its OpenStack system “Broadband Handrail” (BB-H), and it initially started off with unused systems they were able to allocate. The initial BB-H platform was a 40-core system with 512GB of memory and 10TB of storage.

After proving out the concept, the Cyber School’s OpenStack platform has progressed over the course of the past year. Today the BB-H platform is a 2,000-core system, with 36TB of RAM and 4PB of storage.

Rodriguez said several lessons were learned along the way as the U.S. Army built the BB-H platform. Among the lessons is that silos of excellence don’t work and it’s important to share information. From a development perspective, storing everything in a version control system is critical both for disaster recovery and for resiliency.

The BB-H platform is not based on any specific OpenStack vendor platform; instead, it is built from upstream open-source sources, according to Apsey. In response to a question from eWEEK, he noted that among the tools and training available on BB-H is the open-source Metasploit penetration testing framework.

While the various branches of the U.S. military have classified infrastructure and cyber-defense components, the U.S Army Cyber School’s  OpenStack infrastructure code is currently unclassified and is open on the GitLab repository at https://git.cybbh.space.