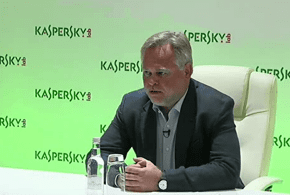 Euguene Kaspersky, founder of Kaspersky Lab, is used to talking about security exploits his security firm has discovered lurking in corporate networks. Today Kaspersky had the rare opportunity to talk about an exploit that hit his own network and remained undetected for months.

Kaspersky (pictured) dubbed the advanced persistent attack (APT) malware Duqu 2.0 as it is related to the Duqu state-sponsored malware first discovered in 2011. During a live Webcast press conference from London, Kaspersky detailed the Duqu 2.0 exploit, being cautious not to attribute the attack to any particular nation-state. In addition to hitting Kaspersky Lab, Duqu 2.0 took aim at the recent P5+1 Iranian nuclear arms negotiations, which has led some to speculate that the State of Israel is somehow connected to Duqu 2.0.

The Duqu 2.0 attack made use of three different zero-day exploits in Microsoft, all of which have been patched since June 9.

“The attack is extremely sophisticated, and this is a new generation of what is most likely state-sponsored malware,” Kaspersky said during the press conference. “It’s a kind of a mix of Alien, Terminator and Predator, in terms of Hollywood.” Alien, Terminator and Predator are three famous movies with a relentless evil character bent on destruction.

Kaspersky noted that Duqu 2.0 is very evasive and doesn’t create any on-disk files or registry key entries. Rather, he said that Duqu 2.0 is a memory-based application that behaves in a way that makes it very effective.

“It spreads through the network pretending to be the system administrator which upgrades the software in the network,” Kaspersky said.

Kaspersky admitted that Duqu 2.0 was in his company’s network for several months before it was detected. However, his company has done a deep audit, he said, and he is confident that no Kaspersky customer or partner information was compromised. The Duqu 2.0 attackers were only looking to find information on Kaspersky Lab’s virus research and how the company finds and processes malware, he said.

As to how Kaspersky Lab was able to find the Duqu 2.0 malware, Kaspersky didn’t mince any words. “Come on, it’s stupid to attack a cyber-security company. Sooner or later we’ll find it,” he said. “We have new technologies we test on ourselves, we have an anti-APT tool to detect unusual behavior in our network, and also we use some magic to find new malware on the Internet and this time in our own company.”

As to why Kaspersky decided to disclose the attack against his own company, it’s about sharing information to protect the Internet as a whole.

“Typically, enterprises don’t want to disclose such incidents because of the possible reputation damage, but we decided to behave in a different way,” he said. “We want to show the right behavior because in order to fight cyber-attacks, enterprises must be transparent and if enterprises keep silent they will be killed one by one.”

As a result of the Duqu 2.0 attack, Kaspersky Lab is now smarter and will be able to detect threats and protect customers even better than before, he said.

Kaspersky added that he is concerned that the new Duqu 2.0 attack will eventually find its way from the nation-state-backed attackers into criminal hands and provide more tools to exploit organizations.

“I’m afraid this attack is the next step to the age of cyber-terrorism,” Kaspersky said.