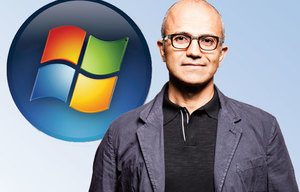 Microsoft CEO Satya Nadella renewed his company’s call for privacy on a global basis at the World Economic Forum in Davos, Switzerland. Speaking during an on-stage interview on Jan. 24, Nadella said that he sees privacy as a basic human right. He also said that he hopes the United States can adopt privacy laws similar to Europe’s General Data Protection Regulation, which he called a “fantastic start.”

Nadella was joined in Davos in his call for privacy regulation by Apple CEO Tim Cook, who has repeatedly called for expanded privacy rules in the U.S. and elsewhere. This was Cook’s first time at the WEF, where he spent most of his time meeting with world leaders about expanding Apple’s business.

Nadella has been vocal about his views on privacy since well before the GDPR went into effect on May 25, 2018. He was a driving force behind Microsoft’s refusal to provide the contents of a personal email account on a server in Ireland belonging to an EU citizen. Shortly after the GDPR went into effect, Nadella announced that Microsoft would be adopting GDPR-like privacy standards globally.

During the WEF interview, Nadella made a stronger call for privacy, bolstered by his company’s efforts since the GDPR went into effect. Since that time, Microsoft has created an entire privacy center along with details of what data Microsoft collects, what it does with that data and how users can control the use of that data.

A Call for Better Regulation of Facial Recognition

Microsoft is one of the leading developers of facial recognition technology and has already incorporated the technology in its “Windows Hello” authentication system.

However, the call for more regulation was not unanimous. IBM CEO Ginni Rometty, speaking with CNBC from the WEF in Davos, said that with too much regulation, “the casualty is the whole digital economy.” Rometty referred to the growing wave of regulation internationally with alarm, noting the number of privacy laws being considered around the world.

However, Rometty did stress that individual privacy—which she called “consumer privacy”—is critical to protect. She said that in its 108-year history, IBM has always protected individual privacy. Apparently, she wasn’t aware of IBM’s history in the 1930s and 1940s in which the company was instrumental in using data to breach the privacy of millions of Europeans.

For its part, Nadella’s push for privacy practices is backed up in large part by Microsoft’s own privacy efforts. Unlike most other companies that are part of Big Tech, Microsoft is very clear about what data it uses, what that data is used for and how users can find out what that data is. Unlike, say, Facebook, this is easy to find and the methods of retrieving the data, or of being forgotten by Microsoft, are clear.

In this, Microsoft is joined by Apple, which is well-known for its privacy stance. Like Microsoft, Apple has defied the U.S. government’s efforts to gain access to protected data and has provided users the tools to protect their data.

Unfortunately, the problem with expressions of policy at fora such as the WEF is that they are just that—expressions. The only people who hear them are generally the industrial and governmental elite when they bother to attend such events. And even when governmental policy makers attend the WEF, they have little accountability for the expressions they hear, or for the ones they make.

A call for privacy in Davos, when U.S. attendance is diminished because of a government shutdown and when EU attendance is unaffected because Europe already has the GDPR, means that it’s up to the rest of the world. Those other representatives include some democracies, but many of the attendees hail from places where the concept of privacy is an anathema, where protection of individual rights is abhorrent and where the concept of human rights mostly brings chuckles.

If Nadella really wants his call for privacy protections worldwide to mean something, then he should use his company’s position in the marketplace, and its overwhelming power in the world of technology, to make it happen. There’s little question that Nadella’s heart is in the right place and that his leadership has helped Microsoft become an example of how to handle privacy concerns, but there needs to be more than that.

Perhaps it’s time to suggest that Microsoft put some effort behind its statements and start using its position and influence to make widespread privacy practices a reality. This is an area where Big Tech actually could make a difference, where working with Apple and maybe IBM, technology companies implement the privacy practices as Microsoft and Apple have done.

If Big Tech decides to do something positive, it may not matter if the world’s governments lag behind, because the decision will have already been made. Privacy protections will exist in every hardware and software platform whether they want it to or not.