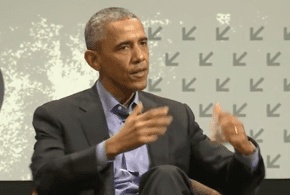 As the debate between the FBI and Apple rages on over the unlocking of a terrorist’s iPhone, many in the government have provided their viewpoints on the issue, and now at long last, so too has President Obama.

During a session at the South by SouthWest (SXSW) conference on March 11, Obama was asked about his views on the Apple-FBI case—in which the FBI wants Apple to unlock the iPhone 5c cell phone of San Bernardino County, Calif., shooter Syed Farook—in light of the fact that the president and his administration are at SXSW asking the tech community to help improve government overall.

Obama noted that he can’t comment specifically on the Apple versus FBI case. That said, he did provide a great deal of context and insight into his thinking on encryption and the balance between privacy and security.

“All of us value our privacy, and this is a society that was built on a Constitution, a Bill of Rights and a healthy skepticism about overreaching government power,” Obama said.

The ability of law enforcement to search an individual’s property is not a new phenomenon, having been around long before the invention of smartphones. If law enforcement has probable cause to believe that a suspect is involved in a criminal activity, a warrant can be issued to search that individual’s belongings and premises, in search of evidence of any form of wrongdoing, he said.

In general, society agrees with law enforcement’s right to search a suspect’s belongings, as it is understood that there is a need to have security and protect public safety, according to Obama.

“I am of the view that there are very real reasons why we want to make sure that government cannot just willy-nilly get into everyone’s iPhone that is full of very personal information,” he said.

Obama understands why the general public is concerned, noting that the disclosures from U.S. National Security Agency (NSA) whistleblower Edward Snowden have elevated Americans’ suspicions. That said, Obama was quick to minimize the actual reality of the U.S. government’s intelligence gathering efforts on its citizens.

“The Snowden issue vastly overstated the dangers to U.S. citizens in terms of spying,” Obama said. “The fact of the matter actually is that our intelligence agencies are pretty scrupulous about U.S. persons.”

The president did admit that the Snowden disclosures revealed real excesses in the surveillance of persons overseas, and those excesses have now been fixed.

The president also weighed in on the issue of encryption—which is at the heart of the FBI-Apple dispute, as well as being a broader conversation in the technology industry. Encryption is required to keep modern technology communications safe, Obama said. However, he added that he worries that if an impenetrable device is built, in which the encryption is so strong that there is no way in, law enforcement will be hindered in its attempts to apprehend criminals and disrupt terrorist plots.

“If government can’t get in, then everyone is walking around with a Swiss bank account in their pocket,” Obama said. “There has to be some consensus solution to be able to get into information somehow.”

He is concerned that the creation of a key to allow access to a device’s encryption could be used for any device and potentially be misused. The government has engaged with the technology community to work aggressively together to solve this problem. For more than 200 years, the U.S. government has sought a balance between privacy and security, and it’s not reasonable to put the value of a phone’s data about other values, he said.

Obama said there’s a need to create a system where the encryption is as strong as possible and the key is as secure as possible but is accessible by a very small number of people for a subset of issues understood to be very important.

Overall, the president said that he is a strong advocate of civil liberties, but also that the dangers are real and maintaining law and order in a civilized society is important.

To make his point about balance, Obama noted that Americans make compromises all the time. At airport security checks, for example, travelers allow TSA workers to go through their belongings in what can sometimes be an invasive experience. The president remarked that while airport security can be an intrusion on privacy, everyone recognizes the need.

“This notion that somehow our data is different and can be walled off from the other trade-offs we make I believe is incorrect,” Obama said.