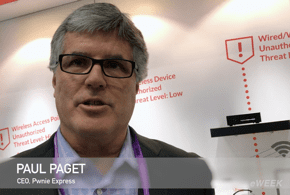 The Mirai botnet, which comprises infected internet of things (IoT) devices, is a real threat that has caused concerns across organizations big and small. Mirai and the associated risks of unmanaged IoT devices also represent a business growth opportunity for security vendor Pwnie Express.

Although Pwnie Express is perhaps best known for its hardware, Paget said a core focus for the company is its Pulse software-as-a-service (SaaS) platform. Pulse provides enterprises with visibility into network security risks across a distributed organization, with additional analytics. Pulse now also provides a security rating system that provides a score for a given organization’s network security posture.

“We have seen the market wake up to the device threat problem,” Paget told eWEEK.

The Mirai botnet attacked DNS provider Dyn in October 2016, causing an internet slowdown; it was also behind the 1T-bps attack against internet service provider OVH in September 2016. The infected IoT devices that make up the botnet include cameras as well as routers.

Paget noted that concern about Mirai has helped to drive business to Pwnie Express.

“Mirai was a public thing, and it hurt a lot of people,” he said.

Looking beyond Mirai, Paget noted that there are attacks happening within companies through devices today. Pwnie Express recently conducted its own study and found that 20 percent of surveyed companies in the past year were impacted by ransomware attacks that were connected in some way to an IoT device.