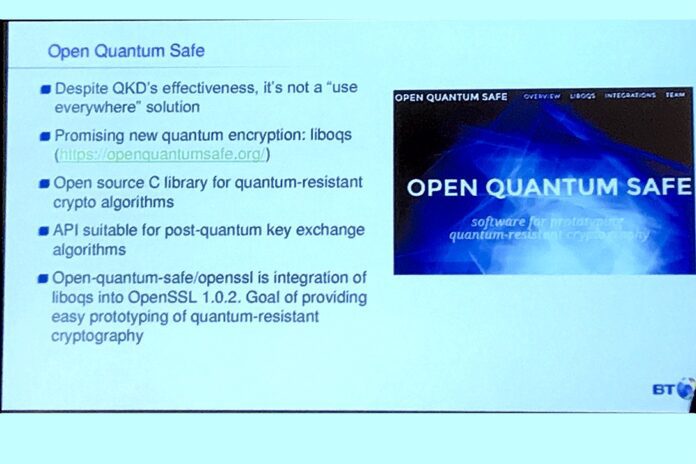 One of the key reasons why computers were created in the first place was to help create and crack cryptography, according to Konstantinos Karagiannis, Chief Technology Officer for Security Consulting at BT Americas.

Today it is the race to crack modern cryptography that is driving quantum computing research and development, Karagiannis asserted in a session at the Open Source Summit in Los Angeles.

Quantum Computing is very different from current forms of silicon based computing. The allure of quantum computing is that it can make use of quantum states of matter, including subatomic particle entanglement and superposition, to achieve massive computer processing power

“Imagine a world where you could read everyone’s encrypted communications in real time, that’s the promise of a quantum computing machine,” Karagiannis said.

At the core of quantum computing power measurements is the concept of the qubit (quantum bit). Karagiannis said that unlike a bit in the classical silicon computer world, which is a binary choice of either one or zero, a qubit can be one, zero or a superposition of both.

Karagiannis explained that superposition also means that quantum computers can perform operations that a classical computer simply cannot do, such as  analyzing all possibilities at the same time.

“It’s not about speed, it’s about approaching computation in an entirely different way,” Karagiannis said. “This is different than massively parallel computing.”

Karagiannis explained that one of the first applications for quantum computing is specifically looking at cracking Public Key (PK) cryptography. He noted the PK cryptography relies on a classical computer’s difficulty at factoring large numbers. For example, he said that to crack PK today, a system would need to find factors of a 400-digit number.

“With a quantum computing cracking PK should be trivial,” Karagiannis said. “If you have enough qubits, you can literally try every number combination in all dimensions and you’d be getting the right answer.”

Looking beyond PK encryption, Karagiannis said that there is a non-trivial risk for crypto-currencies such as  Bitcoin, from quantum computing’s power. Bitcoin’s blockchain uses Elliptic Curve Cryptography (ECC) which is a Public Key system that is based on finding numbers on an elliptic curve.

Karagiannis said that using a modified version of a mathematical approach known as Shor’s algorithm, it’s possible to determine all ECC related keys used by Bitcoin.

To secure Bitcoin ECC is used to provide an address to get a private key. Using quantum computing it should be possible to download the entire blockchain to obtain the private key, Karagiannis said. He added that a quantum computer would theoretically be able to get the private key for every person that has ever made a Bitcoin transaction.

“Bitcoin and most blockchain based currencies are currently, quantum weak,” he said.

There are multiple efforts underway to develop cryptography that will be more resistant in the quantum era. One such effort is the Open Quantum Safe which is an open-source initiative that is building a C library called liboqs which is being designed as a quantum-resistant cryptographic algorithm.

The initial implementation of Open Quantum Safe is being applied to the open-source OpenSSL project, which is widely used on the internet today for SSL/TLS encryption. Looking at the future of cryptocurrency in a post-quantum world, there are also multiple open-source efforts underway including one called, the Quantum-Resistant Ledger (QRL).

“We have to be ready for the quantum apocalypse that is coming,” he said.