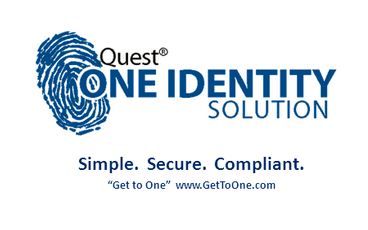 Quest Software identity and access management arm One Identity has launched a new version of its platform that connects natively with Active Directory and Azure environments in hybrid clouds.

While Amazon Web Services is far and away the market leader in global web services with 31 percent of the market, Microsoft’s Azure is in second place at 9 percent and growing. So One Identity’s move into this market could prove to be a major one for vendor and customers alike.

Ninety Percent of Enterprises Use Active Directory for Access Management

Researchers have reported that nearly 90 percent of organizations worldwide rely on Microsoft’s Active Directory to authenticate and authorize users on their networks, which breaks down to 500 million organizations globally.

Yet while Microsoft’s launch of the cloud-based Azure Active Directory (AAD) has helped promote steady growth in enterprise cloud adoption, many organizations face significant challenges in efficiently managing the security and administration of their quickly growing hybrid environments.

“The steadily rising appetite for cloud-based productivity tools like Microsoft Office 365 and Exchange Online has driven quick adoption of Microsoft’s AAD, yet many adopting the cloud still, by necessity, have their feet firmly planted in on-premises environments, leading to vast inconsistencies in administrative processes and security execution,” Milburn said.

Coupled with the shortcomings of native and other third-party solutions, the rise of these hybrid AD/AAD environments has led to millions of enterprises struggling with dangerous gaps in security and crippling inefficiencies, Milburn said.

Key new features of this version include:

1. Admin delegation: Fills the glaring gap caused by the lack of privileged account management in native AD and AAD management tools and eliminates risk by granting AD and AAD admins only the rights necessary to fulfill their jobs.

2. Provisioning automation: Ensures the consistency of all provisioning/de-provisioning tasks (including group memberships) across both on-premises AD and AAD (and all associated applications such as Exchange, Exchange Online, Office 365, SharePoint, SharePoint Online, etc.) through available templated workflows, eliminating error-prone redundancies, inefficiencies and incidents of human error.

3. Comprehensive auditing: Facilitates compliance with audit trails of administrative rights and all activities performed with those rights across on-premises AD and AAD in the hybrid environment.

“Active Directory is a staple in any organization, and with the increase in adoption of Azure Active Directory, as well as a targeted focus on digital transformation, we’re seeing a concentrated effort around preparing an environment for migration and effectively administering the hybrid environment going forward,” said Tim Eichmann, head of infrastructure and cloud services at Core Technology Systems, Ltd.

“As such, a single console that serves as the epicenter of control and security for AD and AAD is necessary.”