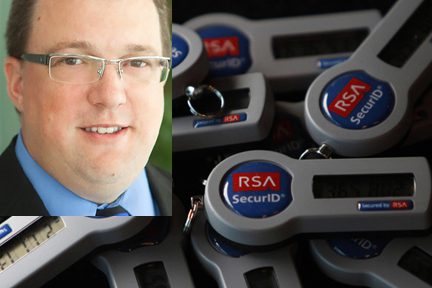 SAN FRANCISCO–What types of security tools actually work for the most people using connected devices? Passwords or PINs certainly have been the No.  1 choice for authentication for a lot of years, but many people believe that the time for punching in such a code has peaked. Hackers have been getting beyond passwords with impunity by simply using new tools widely available on the dark web.

Enterprises have been turning to identity-driven safeguards, two-factor authentication, facial recognition and others. Innovation is always welcome in this sector, because nothing is airtight here anymore.

Earlier this week at the RSA 2018 Conference at Moscone Center, eWEEK met up with the host company’s chief of identity products, Jim Ducharme (pictured), to see what trends he’s seeing and what products companies are buying. Ducharme’s job is to guide the progress of all the company’s identity governance/lifecycle and secure access products; this is not an uncomplicated task.

What’s Top of Mind at RSA

“The mission of my team is to help our customers with identity assurance and access assurance,” Ducharme told eWEEK. “It’s all about knowing you-are-who-you-say-you-are, and making sure that you have access to the stuff you’re supposed to, and nothing more.”

It’s also about how to integrate user authentication automatically into the user experience (UX), so that the user doesn’t have to think about checking into or turning on a device in a secure fashion.

RSA continues to iterate on its own Secure ID product that has been around for decades, Ducharme said. He answered a set of questions on this topic from eWEEK on April 16, Day 1 of the conference, which attracted more than 40,000 attendees from more than 100 countries.

eWEEK: Passwords obviously are still the standard as the No. 1 security method used by most people. But good options are needed because the perimeters are being mercilessly attacked billions of times a day. Are we necessarily going to see more biotech-related security, such as facial and iris recognition and fingerprint ID, as time goes on?

Ducharme: As you see with the iPhone X, for example, you have Touch ID. Apple’s done a great job in incorporating biometrics with the user experience. That’s really the difference.

As far back as 10 years ago, there was this big fad where even laptops were coming with fingerprint sensors (the kind in which the user rolls his/her finger over a sensor), but they failed miserably. Now you hardly see them. Why is that? I think the reason was that wasn’t a natural integration into the user experience.

When I use my face ID now, I pick up the phone and just look at it. (Samsung has built facial recognition into its Galaxy 8 and 9 phones; in fact, it had it before Apple.) It’s really about incorporating the authentication scheme with the user experience. I can guarantee you one thing, that when you use your phone, you’ll look at it. Why not incorporate something (easy) that we can do, that’s also a biometric?

Apple has users push a button to open their phones, but the thing is now that the phones have accelerometers in them, you don’t even need to push a button to turn them on anymore–they can come on automatically.

You have to innovate by saying: ‘How do we incorporate authentication in the natural user experience?’ That’s where biometrics has a nice fit.

eWEEK: Can you offer some specifics?

Ducharme: We’re going to see a lot about other sorts of factors around ‘Are you who you say you are?’ Your normal pattern of usage can be used to determine ‘Is this actually Jim?’

Think of it less as the importance of the biometric itself but information that we can use to blaze that trail to show that it really is you. How do we find those repeatable patterns? A biometric that’s got a level of fidelity of one in 50 million, or one in 10 million with touch ID is good, but how do we go beyond those into behavioral patterns?

The conversation isn’t about how strong the biometric is—yes, that’s important—but it’s about how we can use all these factors in combination to build it (security) out. Now this doesn’t mean we make the user jump through six hoops to know who they say they are.

When you pick up your iPhone, it’s the aperture at which you hold the phone, meaning are you the only one who ever hold your phone that way? No, but it’s a piece of information. As we build this out, the more factors we use that don’t involve the user doing something, saying something or remembering something, the more confidence and assurance we have that this person is who they say they are.

eWEEK: Is RSA doing anything new in terms of two-factor authentication?

Ducharme:  We’ve have two-factor and mobile-based two-factor for years. RSA is best-known for the conference you’re attending; the second-best things we’re known for are our Secure ID tokens, the hardware tokens. We still ship millions of those every year. A lot of people don’t know we do two-factor, but we work on that all the time.