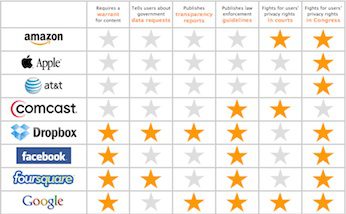 With the provocative title of “Who Has Your Back?” a new report concludes that while many technology service providers have made impressive strides in their commitment to users’ rights in recent years, there is plenty of room for improvement.

Increasingly, Internet companies are formally promising to give users notice about law-enforcement requests for information, unless prohibited by law or a court order, according to the report from the Electronic Frontier Foundation (EFF), a nonprofit digital rights group. The organization also found a dramatic increase in the number of companies publishing law-enforcement guidelines for making data requests. This year, two companies—Twitter and Sonic.net—received a full six stars, while Verizon and MySpace earned no stars.

The largest social networking site, Facebook, has yet to publish a transparency report, and while Yahoo has a public record of standing up for user privacy in courts, it hasn’t earned recognition in any of EFF’s other categories.

Meanwhile, Amazon holds huge quantities of information as part of its cloud computing services and retail operations, yet does not promise to inform users when the government is seeking their data. Amazon also does not produce annual transparency reports or publish a law-enforcement guide, according to EFF.

Although Apple and network operator AT&T are members of the Digital Due Process coalition, they don’t observe any of the other best practices the EFF measures. And this year—as in past years—MySpace and Verizon earned no stars in the report, which noted the organization remains disappointed by the overall poor showing of Internet service providers (ISPs) like AT&T and Verizon in their best practice categories.

“Transparency reports have become an industry-standard practice among major technology companies since we started issuing this report in 2011,” Marcia Hofmann, EFF senior staff attorney, said in a statement. “Through those reports, we’ve learned more about law-enforcement requests for user data. We publish this annual report to encourage companies to let users know how data flows to the government, and to encourage companies to stand up for their users.”

The report also noted a dramatic increase in the number of companies publishing law-enforcement guidelines. Seven companies—including Comcast, Foursquare, Google, Microsoft, SpiderOak, Tumblr and WordPress—earned stars in this category for the first time this year.

“There’s a lot to celebrate in this report, but also plenty of room for improvement,” Nate Cardozo, EFF staff attorney, said in a statement. “Service providers hold huge amounts of our personal data, and the government shouldn’t be able to fish around in this information without good reason and a court making sure there’s no abuse. This report should be a wake-up call to Internet users that they need more protection from the companies they trust with their digital communications.”