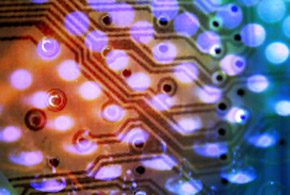 University researchers down under have claimed a breakthrough regarding coding in silicon microchips.

The Australian researchers from the University of NSW said the breakthrough brings the first functional quantum computer one step closer.

The university researchers essentially demonstrated that a quantum version of computer code can be written on a silicon microchip. Their research reportedly passed the Bells Test (a tough scientific test that detects even the most minor imperfection), with the highest score ever recorded in an experiment.

The findings were published in the international journal, Nature Nanotechnology.

Quantum computing promises a major breakthrough for computers. At the moment, the most well known commercial quantum specialist is D-Wave, which has sold some of its designs to clients including Google and NASA.

Indeed, quantum computing is seen as the next step forward for computers when analyzing large quantities of data. Quantum computers offer a massive improvement over conventional computers because they make use of the fact that quantum systems exist in multiple states at the same time, an effect made famous by Schrodinger’s cat paradox, in which a cat sealed in a box away from all interactions can be simultaneously alive and dead.

A quantum system interacts with information using quantum bits (or “qubits”), which can mean both “1” and “0” simultaneously. Quantum computers can process multiple inputs at the same time—effectively in parallel universes—and determine the right answer to problems which have a huge numbers of possible solutions, as long as their qubits can be kept in a coherent state, isolated from the outside world.

So for example, the theory is that a quantum computer will be able to do tasks that are impossible today, such as large-scale financial analysis and more effective drug development.

And according to the Aussie researchers, until now computer scientists around the world have been trying to write quantum code in a range of materials such as caesium, aluminum, niobium titanium nitride and diamond.

The Guardian newspaper reported that the researchers at the University of NSW have based their research around silicon, as silicon is the building block of all modern electronic devices. Silicon would also make quantum code in a silicon microchip easier, more cost-effective and highly scalable.

The researchers managed, for the first time, to entangle a pair of qubits in silicon. By “entangling” the two qubits, in this case an electron and the nucleus of a single phosphorus atom, the Guardian said that the researchers showed the particles remained connected even when separated so that actions performed on one still affected the other.

“Qubits are physical objects that have two typical states, so imagine a spin that can point north or south, or a circuit where current can flow clockwise and counterclockwise, all binary possibilities,” Professor Andrea Morello, who led the research, was quoted by the newspaper as saying.

“But if you entangle the two of them together, you get a superposition of the different combinations of binary choice, so a spin can now point both north and south, and the current can flow clockwise and counter clockwise. Two binary things are occurring at the same time.”

According to Professor Morello, this entanglement meant a quantum computing language or code will be vastly richer than standard digital codes used in normal computers.

“You can think of it as having an additional vocabulary,” Morello was quoted as saying. “When you speak, you have 26 letters and a few hundred thousand words available to you. In a classical computer, the vocabulary is a combination of zeros and ones that constitute its code.”

“In a quantum computer, imagine that you have the same zeros and ones, but because entanglement of quantum bits allow you to combine them in a way impossible on normal computers, it would be the equivalent of suddenly have a billion new words available to you using those same 26 letters,” he reportedly said. “This is why quantum computing is so powerful.”

In September, Intel teamed up with QuTech, the quantum research institute of Delft University of Technology (TU Delft) and TNO (the Dutch Organization for Applied Research). It said it would invest $50m (£33m) in quantum computing research over the next ten years.

Last year, Google announced that it was entering the field of quantum computing, after its Quantum Artificial Intelligence team partnered with a research team from the University of California at Santa Barbara, Calif.

Microsoft meanwhile had already set up a laboratory dedicated to producing quantum computers. Microsoft’s Station Q, based at the University of California, Santa Barbara will work on ways to construct machines with multiple quantum bits (qubits).

In December 2013, the British government announced it would invest £270 million over the next five years, on five Quantum Technology Centers, which will aim to develop commercial applications for the ideas gaining traction in the academic community.