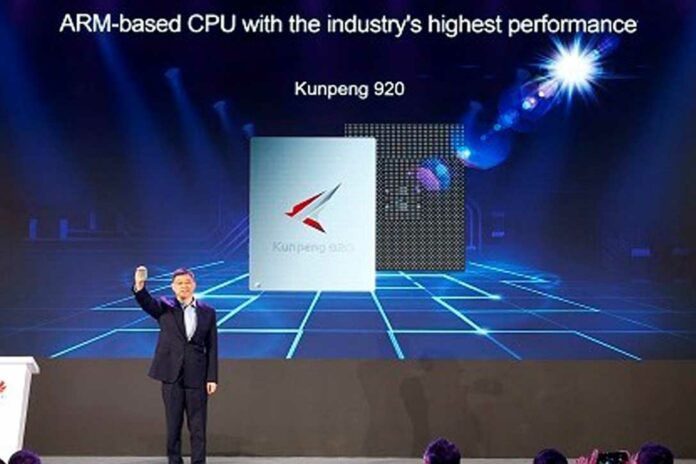 Giant Chinese tech company Huawei, a longtime partner of chip maker Intel, has unveiled a server processor based on the low-power Arm architecture and a new family of systems that will be powered by the CPU.

Huawei officials this week introduced the Kunpeng 920, a system-on-a-chip (SoC) based on Arm’s ARMv8 architecture that they said will target such workloads as big data, distributed storage and Arm-native applications, which need both solid performance and high-power efficiency. The Kunpeng 920 will power the company’s TaiShan servers, which will be aimed not only at enterprise data centers but also Huawei’s cloud services offerings.

With its Kunpeng 920, Huawei joins a number of other tech companies that are leveraging the low-power CPU architecture for such fast-emerging workloads and giving enterprises and cloud customers silicon alternatives to Intel, the world’s dominant server chip vendor with more than 95 percent of the market but which is facing growing competition.

However, the addition of the Arm-based chip doesn’t signal an end to Huawei’s work with Intel, according to William Xu, chief strategy marketing officer of Huawei and director of the company’s board (pictured).

“Currently, the diversity of applications and data is driving heterogeneous computing requirements,” Xu said in a statement. “Huawei has long partnered with Intel to make great achievements. Together we have contributed to the development of the ICT [internet and communications technology] industry. Huawei and Intel will continue our long-term strategic partnerships and continue to innovate together.”

The new chip and servers come at a time when Huawei, which is best known for telecommunications equipment and more recently mobile phones, is looking to develop a greater presence in data centers and the cloud, a feat made all the more difficult given the difficult political climate it’s operating in. Lawmakers in the United States and elsewhere have pushed to limit the amount of business Huawei and fellow Chinese tech vendor ZTE can do in their countries. They’re concerned that the Chinese government could put backdoors into products sold by the companies.

In an interview with CNBC, Xu said building good products will be the key to being successful, regardless of the political challenges.

“Only by achieving good-quality products can we win our customers,” he said. “We will obey laws and restrictions in local markets, and eventually make products that are recognized and welcomed by customers.”

Huawei’s efforts to grow in the data center and cloud markets also puts it into tougher competition, not only with server makers like Hewlett Packard Enterprise, Dell EMC and Lenovo, but also cloud providers such as Amazon Web Services (AWS), Google Cloud, Microsoft Azure, and Chinese companies Alibaba and Tencent.

According to Huawei officials, the Kunpeng 920 is based on a 7-nanometer manufacturing process and designed by the company using an ARMv8 architecture license. By optimizing branch prediction algorithms and improving the memory subsystem architecture, company engineers have been able to create a CPU that performs 25 percent better on some benchmark tests while offering 30 percent better power efficiency than other processors, they said. The SoC includes 64 cores running at 2.6GHz, integrated eight-channel DDR and 46 percent more memory than other offerings. It also offers 640G-bps bandwidth and support for PCIe 4.0 and CCIX interfaces.

In addition, the TaiShan servers will deliver 20 percent better computing performance than competitive systems and will enable Huawei Cloud to offer such services as elastic cloud, bare metal and cloud phone. There will be three models: one focused on storage, another on high density and a third on a balance of both.

The introduction of the Kunpeng 920 is the latest reminder of the fast-changing nature of the server chip business, driven by such factors as the slowing down of Moore’s Law and the rise of such workloads as artificial intelligence (AI), machine learning and analytics. Intel for more than a decade has had little competition in the space, but the company in recent years has had delays in releasing its 10nm products—they’re now due later this year—while other companies like Advanced Micro Devices are preparing 7nm chips. The company last month laid out an aggressive roadmap of new architectures and chips for everything from PCs and servers to networking equipment, as well as a new 3D packaging technology called Foveros.

However, AMD has made gains with its Epyc server chips based on the company’s “Zen” microarchitecture, and IBM continues to innovate on its Power chips. In addition, in the Arm space, Cavium—now owned by Marvell—has its ThunderX2 SoCs on the market while Ampere is developing its own Arm-based chips. AWS in November unveiled its homegrown Arm-based Graviton chips, which it is running in new cloud instances, and Microsoft officials in 2017 said they are incorporating Cavium SoCs in Azure.

The Kunpeng 920 is not Huawei’s only use of the Arm architecture. The company also offers its Ascend chips for running AI cloud workloads and Kirin 980 for smartphones. In addition, Huawei building its own Arm-based chips is in line with initiatives by the Chinese government to encourage its tech vendors to develop their own products rather than relying on products—including processors—made by U.S. companies.