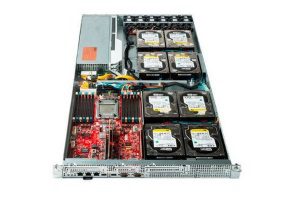 Running the cloud on processors inspired by smartphone chips? Recent moves by Microsoft and Qualcomm may soon make it a reality.

Microsoft and mobile chipmaker Qualcomm announced a collaboration at Open Compute Project (OCP) Summit 2017 that may improve the prospects of ARM-based servers in the data center.

There have been several attempts by Dell, Lenovo and others over the years to bring ARM servers into the mainstream, enabling data center operators to capitalize on the architecture’s power-sipping attributes. Needless to say, servers powered by Intel’s x86 chips continue to dominate the market.

At the OCP Summit in Santa Clara, Calif. this week, Microsoft and Qualcomm may have given proponents of ARM in the data center renewed hope.

Intriguingly, the companies also conducted a public demonstration of Windows Server running on a Centriq 2400. The optimized system software was developed for “Microsoft’s internal use,” according to the companies. Separately, Cavium is showing off a port of Windows Server on its second-generation, 64-bit ThunderX2 ARMv8-A processor.

As far as an ARM-enabled SKU of the server operating system for the computing public, “Microsoft has no current plans to commercially release Windows Server for ARM64,” a Microsoft spokesperson told eWEEK.

Nonetheless, Microsoft’s and Qualcomm’s server initiatives are intended to bolster ARM’s chances in the market for cloud data center equipment.

“Our collaboration with Microsoft and contribution to the OCP community enables innovations such as Qualcomm Centriq 2400 to be designed in and deployed into the data centers rapidly,” Ram Peddibhotla, vice president of product management at Qualcomm Data Center Technologies, said in March 8 announcement. “In collaborating with Microsoft and other industry leading partners, we are democratizing system design and enabling a broad-based ARM server ecosystem.”

Meanwhile, ARM servers are set to start elbowing their way into Microsoft’s own cloud data centers.

“We’ve ported and tested cloud services to them, and overall, we’re seeing a very compelling value proposition in them,” said van Doorn of the Qualcomm and Cavium products. “These are servers with very high single-track performance; these are not the ARM servers of a couple years ago, where you had lots of cores and threads, but really no performance per thread.”