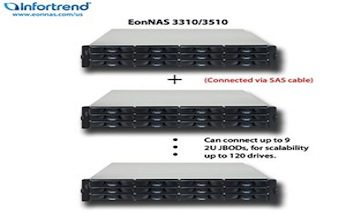 Both models offer two connectivity options, either 10GbE SFP+ connectivity or 8Gb Fibre Channel configuration, and for capacity, both systems offer a maximum of 480 terabytes (TB) or total of 120 hard disk drives (HDDs) when attached with just a bunch of disks (JBOD) expansion enclosures (up to 9) through serial attached SCSI (SAS), a point-to-point serial protocol that moves data to and from computer storage devices such as hard drives and tape drives.

“The new ZFS-based EonNAS 3310 and EonNAS 3510 further enhance our rack mount NAS lineup for SMB and SME users. They satisfy the high-performance requirements and capacity expansion needs of SMBs,” William Chen, director of product strategy for SMB storage at Infortrend, said in a statement. “Many of the data service functions which were previously only available in enterprise technologies such as WORM (Write Once, Ready Many), NDMP, SSD Caching, data deduplication, compression and corrupt data self-healing are now available for SMB customers.”

Resource utilization is enhanced by additional features, including data deduplication and compression, and data is further protected by snapshot technology, which offers space-efficient differential data copies to roll back data or restore files in the event of data errors. This protects data from accidental deletions, corruption and modification. By accessing a snapshot copy, users can restore data availability and recover from data disruptions. The snapshot feature can be used to protect shared folders and system settings.

Finally, read and write performance is boosted by SSD Caching by allowing users to use up to four solid state drives (SSDs) as full read/write cache to accelerate input/output (I/O) processing.