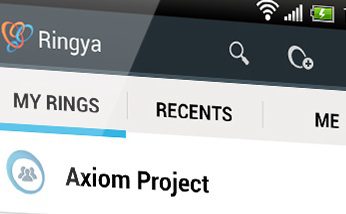 Ringya, the development company behind the mobile application of the same name, announced the availability of the app for Google Android devices. The application allows smartphone users to convert contact lists into organized, sharable mobile contacts by snapping a photo of the list with the smartphone’s camera.

The application has the ability to transform paper lists into digital, mobile “Rings” by snapping a photo of any paper list, email or other digital format of a contact list. The application then transforms the photo into a searchable, sharable contact list on the user’s smartphone. The app also allows instant access to contacts in context. To ease the search process, the rings are arranged by group so various work, school, personal and committee lists remain organized.

In addition, contextual caller ID shows the user who is calling and how they fit into the user’s world, such as a colleague who works as an account manager for a particular organization. Group communication allows users to email or text individuals, sub-groups or an entire contact list. The app also makes it possible to share contact lists with colleagues and other people in the contact list. Once shared, any update made to a Ring is then updated for everyone on the list.

The app also boasts navigation functionality. When a user clicks on an address within a contact in Ringya, it will automatically connect the user to the mobile navigation app Waze or Apple Maps. On Android devices, the default action would be to launch Google Maps. If there are multiple map apps installed on the specific device, the Android OS will pop up a screen asking the user which of them to use.

“We created Ringya as a Dropbox for contacts,” Ringya CEO Gal Nachum said in a statement. “We realized that managing contacts has become a real challenge for users and believe that only by spreading the management and maintenance work over multiple circles of trust can we address this challenge.”

The app, which had previously been available for Apple’s iOS platform, can be downloaded for free through the Apple App store or Google Play. The company also noted on its Website that other mobile operating platforms like BlackBerry or Windows Phone could be added at a later date.

Ringya creates special contacts in the user’s address book in order to be able to show users the caller information when they receive a call from any of their fellow Ring members. These contacts are managed by the Ringya app and do not mix with regular contacts.

The company noted the technology does not allow users to make free calls or send free text messages from their smartphones. When a user call or text someone using Ringya, the call and text message are charged by the carrier like any other call or text message, Ringya’s Website said.