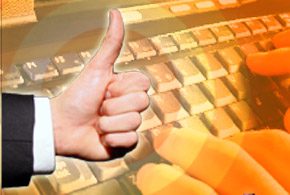 Part of this may be due to the increasing number of small and midsize businesses (SMBs) getting the hang of social media marketing. Small business owners are taking an “independent and resourceful” approach to learning more about social media, the report indicated.

Whereas only 18 percent of SMBs ask for social media help from third-party experts, twice as many (36 percent) turn to online resources. Their hard work appears to be paying off, as nearly 40 percent of small business owners are reporting a return on their investment, with 30 percent realizing returns greater than $2,000.

“As a highly pragmatic and time-constrained group, small business owners are strategically adopting platforms that show real results for their business,” Manta CEO Pamela Springer said in a statement. “However, social media is not a stationary phenomenon. As SMBs shift from the experimental stage to a results-focused phase, their social media usage will evolve to maximize the value.”

However, small businesses are also encountering obstacles along the way, with 18 percent of SMBs reporting Facebook is the most difficult platform to maintain, followed by LinkedIn and Twitter. Small business owners are also in need of business-focused platforms to help them connect with prospects and peers. The report revealed 36 percent of SMBs indicate the primary goal of using social media is to acquire and engage with new customers.

Overall, with the potential to generate a compelling return on investment (ROI), social media involvement is trending upward in the small-business community. Nearly 50 percent of SMBs have increased time spent on social media compared to a year ago. In addition, more than one in three small business owners said they dedicate between one and three hours each week managing their social media channels, while 10 percent spend more than 10 hours.

While more small businesses (nearly 26 percent) are investing in social media, online advertising and marketing, higher levels of optimism and business growth have not translated into an increase in employment, as only about 5 percent of small business owners said they plan to hire new staff this spring.

This finding correlates with the results of a study by PNC, which earlier this month found American SMBs plan to delay hiring new employees or seek new loans amid cautious optimism about the economy. Three out of four (75 percent) small businesses said they expect their staffing to remain unchanged for the next six months, and nearly one out of three said they will choose to do more work with fewer employees.

Social media can also act as a double-edged sword, according to an online survey from the authors of “Crucial Conversations,” a book exploring influential speech habits. The study found social media sites are fostering an increasingly hostile user base. Nearly eight in 10 (78 percent) of the 2,698 respondents reporting rising incivility online.