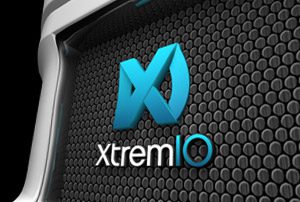 For years, EMC had to partner with hard-disk-type server makers—Dell is one key example—if it wanted to optimally configure its storage arrays natively into a system project.

Although it’s still working with partners on those old-school but still-strategic hard-disk-drive (HDD) integrations, EMC now has its own in-house NAND flash server maker to handle new-generation data center setups. This is the former XtremeIO, which EMC acquired in May 2012 for about $425 million.

EMC, having changed the name of the product line to Xtrem Flash, on March 5 launched a new line of PCIe-based NAND flash server cards that accelerate application performance in a big way.

XtremSF is available in a variety of multi-level cell (eMLC) and single-level cell (SLC) capacities, Barry Ader, general manager for EMC’s Flash Business Unit, told eWEEK. It can be deployed as either direct-attached storage that sits within the server to deliver high performance, or it can be deployed in combination with EMC’s XtremSW Cache (formerly EMC VFCache) server caching software to turbocharge network storage array performance.

“This is a broad release of PCIe cards, coming in 550GB and 2.2TB (eMLC) and 350GB and 700GB (SLC) capacities,” Ader said. “When users deploy these with XtremSW cache server software, XtremSF devices can become a caching device for apps such as Oracle, Microsoft SQL and Microsoft Exchange.”

Josh Goldstein, XtremIO vice president of marketing and product management in EMC’s Flash Business Unit, told eWEEK: “These have been proven to deliver a record 1.13 million IOPS [input/output operations per second] in a standard form factor—which is unmatched in the industry.”

All XtremSF PCIe cards, including the 2.2TB model, are standard half-height, half-length 25w size, which provide a high storage-capacity-per-footprint rate. Goldstein said that these cards use only about 50 percent of the power that standard HDDs require.

NAND-flash-based PCIe components are among the hottest-selling new items in data storage. All the major vendors—the most recent being Toshiba/Violin Memory and Seagate/Virident—have their own offerings or have partnered for them. Key PCIe manufacturers include Fusion-io, Micron, Violin Memory, LSI, STEC and Texas Memory (now owned by IBM).

Solid-state storage analyst Jim Handy of Objective Analysis told eWEEK in a forecast 18 months ago that the PCIe interface would become dominant in the enterprise SSD market in 2012, with unit shipments greater than the combined shipments of its SAS and Fibre Channel counterparts. This indeed did come to pass, and analysts expect this trend to continue up and to the right for the next few years.

Peripheral Component Interconnect Express, or PCIe, is a computer expansion-card standard based on point-to-point serial links rather than shared parallel-bus architecture. It is designed to replace the older PCI, PCI-X and AGP standards.