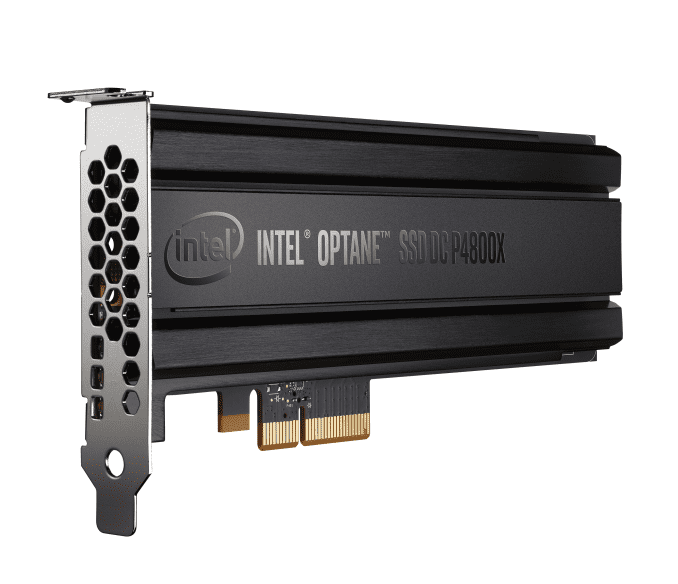 A new type of storage that’s now becoming available for use in data centers will significantly improve the speed of storage, reducing processor wait times, improving latency and saving and retrieving data many times faster than today’s SSDs.

This new type of storage, called 3D Xpoint (pronounced cross-point) uses stacked memory cells that depend on small changes in resistance at conductor intersections. Each memory location consists of a memory cell and a selector.

The new memory technology was jointly developed by Intel and Micron over the course of several years starting around 2012. The technology was announced in 2015, but it wasn’t until a couple of months ago that data center storage devices began to show up as actual products.

Still, 3D Xpoint storage technology could ultimately replace DRAM and the NAND gates in storage drives. Intel is selling drive replacement products for both personal computers and for the data center. Micron is producing drives for its partners and doing research on second and third generation versions of 3D xPoint.

The biggest difference between the flash storage that’s used in today’s SSDs is that they use a type of transistor called a NAND gate, which depends on the presence or absence of an electron. Those gates have a physical speed limit, and they don’t last forever, which means that type of storage drive can eventually wear out.

However, 3D Xpoint memory doesn’t depend on transistors, nor does it depend on electron flow. According to an Intel spokesperson, “3D XPoint memory media does not use any charge for storing the bits and instead relies on a bulk material property change from a low resistance state to a high resistance state. In NAND technology data is altered by placing or removing electrons on the floating (electronically isolated) gate.”

Because of this, memory based on 3D xPoint will last far longer than flash memory. The fact that it will last longer helps offset the fact that storage costs about three times as much as with SSDs based on flash memory. Current 3D Xpoint technology also uses slightly more power than the equivalent flash memory, although that will likely change with newer generations.

A Selection of Form Factors

The products that Intel is selling for data center use are 375 and 750 gigabyte drives in a selection of form factors and standard PCIe interfaces under the Optane brand name. These Intel Optane SSD PC P4800X drives are designed to plug directly into the server bus.

This means you won’t find a SATA (Serial ATA) version. The reason is that normal hard drive controllers such as SATA are far too slow to provide the performance benefit that 3D Xpoint drives deliver. By putting the drives directly on the bus, the latency is reduced and the transfer speed is significantly increased.

Intel has also announced drives for workstations with capacities of 280 or 480 gigabytes. The Intel Optane 900P drives are intended for professional workstations for work such as video editing where storage performance is critical. Intel is also offering them to consumers, which the company describes as “enthusiasts.”

Micron’s QuantX brand name for its 3D xPoint storage devices are being marketed through partner companies. You can expect to see them showing up in laptop and desktop computers this year. The Micron drives are apparently being shipped in an M2 format, which uses a connector that’s on the motherboards of newer machines.

The initial use for the data center version of the 3D Xpoint storage appears to be specialized data centers, such as those used in high-speed stock trading. Those centers are already so time sensitive that they’re placed as closely as possible to their respective stock exchanges to reduce even the infinitesimal delays caused by the speed of light. Making storage several times faster seems like a no-brainer for those.

Another use that’s widely predicted is in artificial intelligence, where storage speed is already an important factor in how AI systems perform. Intel is suggesting that this new storage technology will have an important role in handling big data analytics and in the analysis of very large data sets because it will allow for much faster searches and retrievals and thus much faster analysis.

Big data and AI already go hand in hand, so you can expect to see more effective use of data as this technology moves into data centers.

Initially, Intel is offering its data center drives as discrete units. But it’s a safe bet that you’ll start to see servers with this storage built in, which in turn will allow increased density, because the SSDs require less space.

In fact, it’s unlikely that you’ll see too many data centers using these drives as upgrades where they replace SSDs one by one. Instead, data center managers will just pull the server and replace it with one that’s optimized for 3D Xpoint storage.

This is the first major change in how data storage works in something like a quarter century. You can assume that you’ll start seeing it very soon.