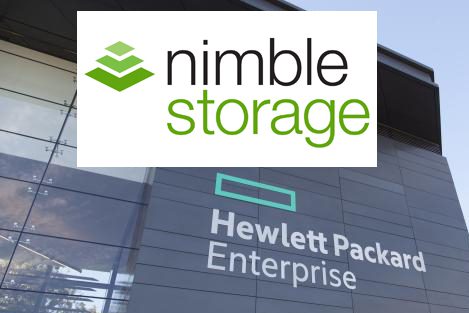 Hewlett-Packard Enterprise, in a deal that came to fruition months ahead of its original schedule, on April 17 completed its $1 billion acquisition of new-gen flash storage maker Nimble.

HPE, which had said it would finish the acquisition in Q3 2017, ostensibly has the all-flash storage intellectual property it requires to improve its position against storage market competitors, which include Dell EMC, IBM, Pure Storage and NetApp.

With the deal, the Palo Alto, Calif.-based IT giant’s position in the high-growth flash storage market improves by a few percentage points. The overall flash storage market, worth about $15 billion in 2016, will grow to nearly $20 billion by 2020 and is evolving at a nearly 17 percent compound annual growth rate, according to industry analysts. HPE is now positioned to reap a good portion of that growth.

HPE inherits Nimble’s set of 10,000 enterprise customers, so the sales folks have got to be happy about that.

There are quite a few smaller, new-gen storage companies out there; most (but not all) of them are not making money and are hoping to be acquired. Those include companies such as Pure Storage, Tintri, Kaminario, Tegile, ClusterHQ, Pivot3 and several others.

So what was it that brought Nimble to HPE’s acquisition attention?

“First, we liked the whole infosight message and capability,” HPE Senior Vice President and General Manager of Storage and Big Data Bill Philbin told eWEEK. “Nimble sort of turns the support model on its ear by providing predictive analytics; not only does it manage the storage asset but it reaches up into the customer’s virtualized applications and looks at rogue VMs, noisy neighbor syndrome, et cetera.

“We thought, taking that along with the rich telemmetry that we already have phoning home from 3PAR and merging that all together, that this would provide an interesting capability for our entire storage portfolio.”

Secondly, Philbin said, Nimble brings flash further down the portfolio for SMBs and midmarket users because “it is very easy to use, easy to install and self-maintaining. We see it as very complementary to 3PAR.”

For users who are more price-conscious, Philbin said, “we still have MSA (storage appliance) and StoreVirtual at the entry level. This (Nimble) is a really good fit from a product perspective and good fit from a cultural perspective—very synonymous with ours.”

HPE plans to incorporate Nimble’s InfoSight Predictive Analytics platform across its storage portfolio, Philbin said. For example, InfoSight automatically detects 90 percent of all issues within a customer’s infrastructure and resolves 85 percent of them, HPE said. This reduces the amount of time and effort a customer’s IT team spends on support activities.

Nimble was founded in 2007 and has about 1,300 employees worldwide. The company delivered revenue of $402 million in its most recent fiscal year, up 25 percent year over year.

Nimble’s analytics platform goes beyond storage to analyze performance issues across the full data path, from apps to the array, and resolves most issues before they occur, Philbin said. In addition, Nimble recently has introduced multicloud storage services that combine on-premises and public cloud storage capabilities for hybrid IT deployments.

What the Acquisition Will Bring Users

Key customer benefits of the combined HPE and Nimble portfolio include:
–the ability to move data and replicate across hybrid flash and all-flash storage to meet unpredictable IT demands;

–predictive support automation to anticipate and prevent most problems and solve remaining issues in minutes;

–quality of service controls and full stack analytics to ensure predictable performance in hybrid IT deployments;

–a future-proofed technology platform with a roadmap to support next-generation storage.

“Customers deploying hybrid IT not only need the performance of flash storage but are looking for predictive intelligence to optimize their infrastructure,” Antonio Neri, HPE Executive Vice President and General Manager of the Enterprise Group, wrote in a blog post. “With Nimble Storage and 3PAR, we can now deliver on those storage needs.”

“Over 10,000 enterprises are using Nimble Storage because our Predictive Cloud Platform is reliably fast, radically simple, and cloud ready,” Nimble CEO Suresh Vasudevan said. “This acquisition validates our technology leadership in flash and in the use of cloud-based predictive analytics.”