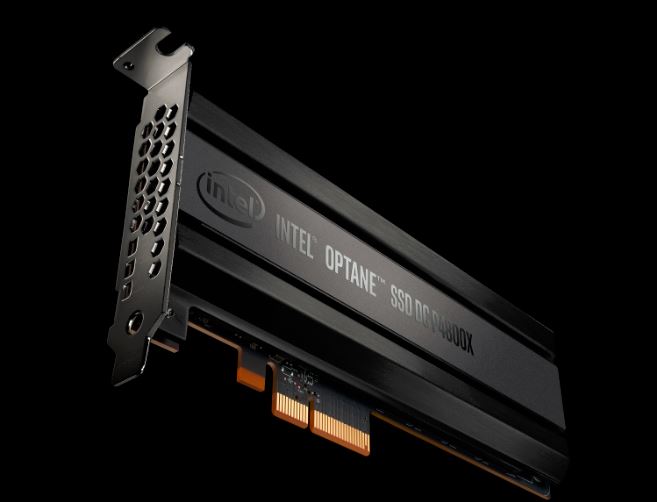 FOLSOM, Calif. — Back in July 2015, Intel and Micron held a joint press event at the Exploratorium on the San Francisco waterfront. The news was the introduction of the two companies’ new “baby” to the world: 3D XPoint (pronounced 3D Crosspoint), the first completely new memory form factor since Toshiba brought NAND flash to the market way back in 1989.

The parents of the newborn non-volatile memory, which has been several years in the development womb, claimed it was going to be able to move data 1,000 times faster than NAND flash, and if that guess is only 10 percent accurate, it’s still awfully fast.

Intel and Micron since have predicted a wide range of business benefits and use cases, ranging from speeding up stock markets, scientific research and oil and gas exploration to making more realistic video games-if that indeed is possible.

Back in 2015, however, that was all conjecture. Eighteen months later–following about 10 years’ worth of development here at Intel’s rambling Sacramento-area research campus–the child is developing its personality, albeit about a year later than had been planned. Intel and Micron had planned 3D Xpoint to be shipping in early 2016, and when that didn’t happen, there were whispers that perhaps this revolutionary new solid-state disk memory chip was experiencing growing pains.

Well, better to spend extra time and research on making it right, rather than having to go back and make fixes later. 3D Xpoint is working in production and now is the foundation for Intel’s Optane SSD, officially introduced March 19 to the world. Optane SSD will be shown physically to the world at CeBIT 2017–the world’s largest electronics conference–in Hanover, Germany, starting March 20.

Editor’s note: To see a larger version of the image, right-click on it and select “View Image.”

In its most simplistic description, 3D Xpoint is a powerful processor that goes vertical in addition to horizontal. Thus the “3D” moniker, and thus the need for an entirely new SSD to hold it.

Intel hosted a group of industry journalists here on its campus to explain not only the development of the new processor and its power/speed potential, but also the form factor and industry use cases it is expected to power up for the next 20 or 30 years.

The Optane DC P4800X (named by an engineer, no doubt) SSD certainly will become an important cog in new-generation data centers, nobody disputes that fact. Its first form factor is a 375GB SSD on a PCIe card. Limited availability started March 19, with general availability coming in the second half of the year.

Intel said it would make available a 750GB PCIe version by June, with a 375GB edition in the U.2 form factor ready for prime time in the second half of the year. A king-size 1.5TB PCIe card and 750GB and 1.5TB U.2 version are also in the works, also for later this year or early 2018.

Intel will be making an announcement about an Optane memory later this month. A DMM (dynamic memory management) module is expected to become available in 2018, the company said.

How 3D XPoint’s new persistent solid-state memory actually works remains a well-kept secret among the team of engineers and administrators at Intel. But if it brings only a small fraction its potential performance, its capabilities make it a no-brainer for a range of applications.

When it was first announced, Intel claimed it would be 1,000 times faster than NAND flash, 10 times denser than DRAM and feature 1,000 times better endurance than flash, although didn’t detail exactly what type of flash it out-performed. As of March 19, these metrics are more specific: 3D XPoint has about 1/1000th the latency of NAND flash (or about 10 times the latency of DRAM), and 10 times the density of DRAM.

In summary, the Optane SSD P4800X is a major new data center server component, built for applications with high read/write loads and seeking low latency performance. The sequential transfer rates of 2400MB/s read, 2000MB/s write are better than average. However, where the new SSD excels is in its low latency–and its ability to sustain high I/O loads, thanks to those low latencies.

Pricing was not discussed at the deep-dive information event for reporters.

Intel, knowing there would be some confusion in describing the performance of this new processor, offered a brief Q&A about a couple of points regarding over-provisioning and die count on the Intel Optane SSD DC P4800X. Here is the clarification:

A: “An Intel Optane SSD is not “overprovisioned” in the same sense of a NAND SSD. The random write performance of a NAND SSD can be increased by increasing the spare capacity percentage, as this makes defragmentation more efficient. Since 3D XPoint memory media is a write-in-place media there is no defragmentation needed, and therefore no performance can be gained in an Intel Optane SSD by increasing spare capacity. With that said, both NAND and Intel Optane SSDs must store ECC and metadata to maintain low error rates throughout the life of the drive, and meet the demanding needs of enterprise customers.

“Additionally, there are significant differences in the 3D XPoint memory media and NAND media. For example, NAND media includes significant extra capacity inside every die for sparing out blocks, as well as managing ECC code words. 3D XPoint memory media does not have such extra capacity. Given these media architectural elements, the resulting SSD architecture and ‘overprovisioning’ cannot be considered in the same way one would consider ‘overprovisioning’ or spare capacity for a NAND-based SSD.

“As to specifics of the Intel Optane SSD DC P4800X: the controller is a 7-channel controller, and performance is best with an even die to channel loading. For the 375GB drive, we have 4 media die per channel, or 28 die total. Spare capacity beyond the user capacity is used for ECC, firmware, and ensuring reliability meets the high standards customers expect of an Intel data center class SSD.”

Wide Range of Expected Use Cases

Leszinske said that we also can expect to see 3D XPoint chips in future data center fabrics, “which is where Intel has been putting substantial investment.”

Naturally, this fast new memory SSD will be ushered immediately into high-performance computing shops first-the invariable first users of most new big-data IT. But because it’s so promising, larger enterprises on the next rung below those other use cases also are expected to take an early look at it.

“I see this getting into the enterprise, specifically in environments that use in-memory databases,” analyst Patrick Moorhead of Moor Insights & Strategies told eWEEK. “SAP, SAP HANA, Oracle-wherever there’s a motivation to decrease the cost versus DRAM, or if you’re trying to get the highest performance, you use this type of memory instead of classic NAND flash memory, that you would use in an SSD (solid-state disk).

A key selling point about 3D XPoint is that it does not require an operating system rewrite for some of the different IT in data centers to take full advantage of it.

“Generally, the deployment of these will be simple because what they’ve done is-even though it’s a brand-new memory architecture-they’ve made it look like to the outside world like either NAND flash or DRAM. For lack of a better term, it ‘talks’ both languages,” Moorhead said.

“Now if you’re buying from an enterprise vendor, say from HP or Dell, you’re going to have to make sure whether these are qualified. But my belief is that because there’s such a revenue opportunity here for people to buy more gear, I expect those vendors to jump on this pretty quickly. And they’ve (Intel and Micron) probably been working with these vendors for years anyway.”