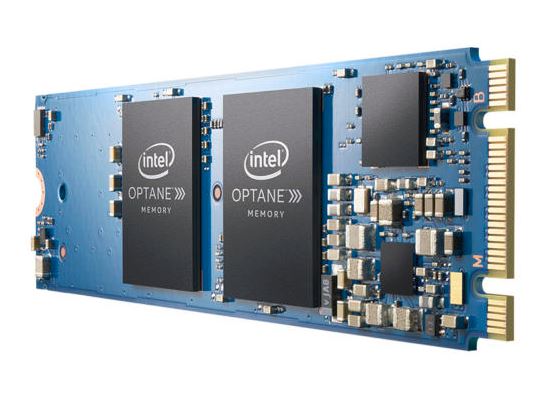 We all might not always agree on politics, but one thing that everybody can shake hands on is that their PCs can always run a little faster.

Intel is staying out of politics but making sure to help civilized society in the other department, thanks to the release March 27 of its own Optane Memory.

Optane Memory is a commercial version of Intel and Micron’s revolutionary 3D Xpoint non-volatile memory processor. It is designed as a fast-cache addition to a conventional spinning-disk PC hard drive in order for the existing power processor to work at optimal speed.

Intel and Micron, which were 10 years in development on this, claimed at the original announcement that 3D Xpoint was going to be able to move data 1,000 times faster than NAND flash solid-state disks. How this will translate to the new Optane Memory chip and how it will perform in the real world is anybody’s guess. But one can surmise that it will be faster.

Starts Going into PCS Next Month

The first consumer Optane-based devices will become available April 24 in two M.2 form factors: A 16GB model for $44 and a 32GB Optane Memory device for $77. Both are rated for very fast read speeds of 1.2GBps and writes of 280MBps.
Users cannot install Windows 10 on Optane Memory; that’s not the way it was designed. The first two Optane Memory devices are meant to be used primarily as cache drives for a conventional PC hard drive.

Do a lot of people still use HDDs to power their laptop and deskop PCs? The answer is yes, big time. Intel cites IDC Research data that indicates 79 percent of desktop PCs in the world still use hard drives. This isn’t going to change for a while, because the cost per megabyte is so affordable compared to solid state-powered PCs.

So there potentially is a vast market for adding a fast chip to hard-drive-powered PCs, and Intel wants to own that market with Optane Memory. Intel believes that because most PC owners don’t necessarily want to give up their large-capacity HDD storage for the faster SSD drives, and that they can spend the extra $80 or so to make it faster, that they will consider doing so.

Good or Better Performance Than an SSD, Intel Says

Intel claims that Optane Memory performance is as good or better than an SSD’s, offering better latency by magnitudes or measurement.

“To put this in perspective, on a given day, most people launch 11 apps, and then launch each app seven times. With the increased speed and responsiveness of Intel Optane memory in a seventh Gen Intel Core-based system, you can power on your computer up to twice as fast, improve overall system performance up to 28 percent faster with storage performance up to 14x faster.”

How to Get Intel Optane Memory

Starting in the second quarter of this year, PC manufacturers that include HP, Dell, Lenovo, Asus, Acer and others will begin shipping both consumer and commercial products equipped with Intel Optane memory.

More information can be found here.