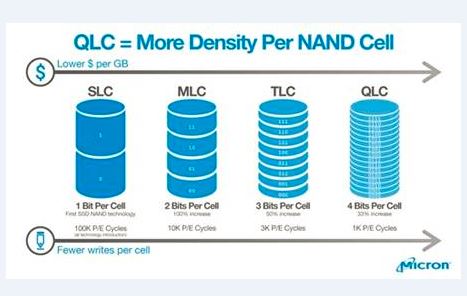 Micron Technology and Intel, whose partnership ups and downs have been likened to that of human married couples, on May 21 announced production and shipment of the industry’s first 4bits/cell 3D NAND technology, otherwise known as quad-level cell NAND.

Don’t mix up “quad-level” with “quad-core,” which describes a segment of Intel processors that have been made for more than 12 years. This is about a solid-state disk of flash memory that is going vertical instead of horizontal.

The companies made the announcement at Micron’s 2018 Analyst and Investor Event in New York  City.

Micron and Intel announced back in January that they will go their separate ways and discontinue their partnership on NAND Flash development after completing the development of the third-generation of 3D NAND flash. However, the divorce decree isn’t final yet. The two companies are still developing the second generation (64-layer), and the third generation is expected to reach 96-layer.

This means that, for development of products greater than 96-layer, the two will part ways. This decision will not bring significant impact in near term on their businesses in terms of manufacturing process technology improvements and product planning, DRAMeXchange said. They will have more opportunities to seek new partners after parting ways.

In the meantime, the two companies have the quad-level cell technology to continue to develop.

Available in a 2.5-inch form factor, compared to the conventional 3.5-inch HDD, the Micron 5210 ION SSD reduces server sprawl by packing more performance into fewer racks, which allows data centers to save on expensive power and cooling costs.

The Micron 5210 ION SSD is now shipping to strategic enablement partners and customers, with broad market availability expected in the fall of 2018. To meet market needs, the Micron 5210 ION SSD will be available in a 2.5-inch (7mm) form factor in capacities ranging from 1.92TB to 7.68TB, enabling more flash capacity per 2U chassis.

Micron said it plans to offer greater capacities in the future.