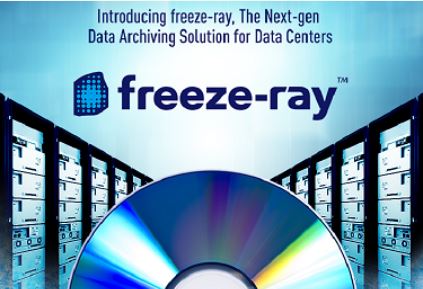 LAS VEGAS—Panasonic isn’t particularly known for data storage, but it’s been developing optical-drive archive storage for several years and has sold a modest amount to some customers, including master data collector Facebook.

This high-capacity cold storage technology hasn’t yet caught on with mainstream enterprise business, but the Japanese electronics giant is hoping that 2016 will finally be the year it does.

At CES 2016 on Jan. 6, Panasonic demonstrated its latest optical-drive technology and told press members about a series of high-profile customers, including Facebook, which is using Panasonic’s Freeze-Ray secret sauce to store user images and videos safely and cost-efficiently on digital tape.

Yes, digital tape. Some people don’t believe it, but it never went away. Panasonic also expects to incorporate Blu-ray optical disks as another backup option.

Because Facebook is okay with the public knowing about it, Panasonic figures that other companies that generate a lot of data will also want to look at this. With these devices, the company is also looking long-term toward the Internet of things market and all the new data that will create, representatives said.

There was a lot of other storage news at CES 2016.

If you really want a ruggedized storage device, check out SanDisk Extreme 510 Portable SSD. This one sports an IP55-rating for water and dust resistance in order to ward off hazards such as rain, spills and rough, dusty trails. It also cushions against falls of up to 6.5 feet (2 meters). Built in a pocket-sized design, the drive features transfer speeds up to 430MB second. It is available in 480GB capacity.

SanDisk also said that the companion app, SanDisk Connect, has been updated to support sharing of content on large displays via AirPlay with Apple TV, and Google Chromecast and Amazon Fire TV, as well as 3D Touch on iPhone 6s and iPhone 6s Plus.

For users looking for more capacity for their 8GB or 16GB smartphones, SanDisk’s 128GB Ultra Dual USB Drive 3.0 for Android might be a good answer. This little drive enables smartphone and tablet users to free up space and transfer photos and videos to a PC.

At 128GB capacity, Android users can now vastly multiply the number of photos, songs, videos and other content kept close at hand without concern about filling their smartphones or tablets. In addition to the higher capacity, SanDisk said, it has improved the device’s performance, which can now achieve speeds up to 150MB per second from drive to computer.

SanDisk also unveiled one of the world’s thinnest 1TB storage drives, the X400 M.2 SSD. The SSD is aimed at the growing category of ultra mobile devices and uses SanDisk’s nCache 2.0 and DataGuard technology so users can work longer without a power source. In addition, the X400 SSD offers data protection through AES 256-bit compliant encryption and TCG Opal 2.0 compatibility.

It looks like a trophy for some great accomplishment, but the LaCie Chrome device is actually the Seagate brand’s latest top-of-the-desk solid-state data storage product, available in 1TB capacity. It may look classy, but it’s also fast, with up to 940 MB-per-second data movement speeds. It also sports a USB 3.1 (10G-bps) interface. Price: $1,400.