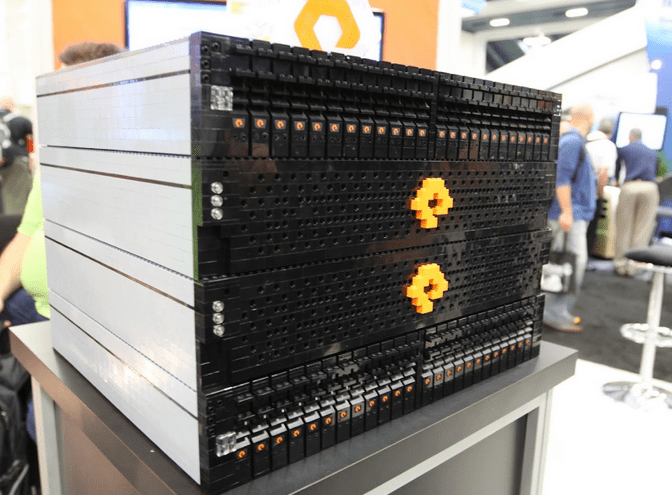 It seems that IT products never stay the same size—they either get way smaller or bigger all the time.

For example, IBM recently announced super-minuscule transistors that pave the way for a soon-to-come 5-nanometer processor, and IoT sensors have been shrunk down to the size of pinheads. On the other side, companies are now providing ultra-fast 40Gb and 100Gb networking pipes, super-fast high-performance servers and unlimited cloud data storage, things never before made available.

In flash storage, Pure Storage is among those providers that continue to go big. The Mountain View, Calif.-based flash storage maker announced at its Accelerate conference June 13 that it has new software that enables its FlashBlade customers to manage up to a whopping 75 blades as a single system. This was unheard of previously.

These are all what can be described as big-time enterprise flash storage features.

With the latest Purity software update for FlashBlade, users can scale from seven to 75 blades for a total maximum capacity of 4PB. With a proprietary networking module that allows up to five chassis to be managed as one cohesive system, organizations can deploy larger-scale, higher-performance systems that process more data at higher speeds, Pure said.

Historically, object storage has been like an offensive tackle in football: big and slow. Slow, however is not acceptable anymore in modern IT. As AWS S3 and other public cloud object storage protocols continue to spur the growth of object storage both on-premises and in the cloud, the pressure is on for storage providers to provide ultra-fast all-flash systems with an increased emphasis on performance.

Following is a breakdown on the main news Pure Storage brought to the table this week:

Building a global sensor network with thousands of connected arrays allowed Pure to deliver cloud-based management and predictive support that has prevented more than 500 Severity 1 issues to date. Now, with Pure1 META, users can obtain answers to performance-forecasting questions, instead of workarounds that resulted in wasted expenses from over-provisioning or downtime from under-provisioning.

The company also announced the results of Evolution, an independent global research survey that explores the way businesses are balancing infrastructure and applications today and beyond.

Despite strong overall indicators of public cloud growth, a significant number of companies that ran workloads in public cloud environments have actually moved some or all of those workloads back on-premises (43 percent of businesses in North America have done so, according to the survey). In EMEA, 65 percent say they have reduced use of public cloud in the last 12 months because of security concerns.