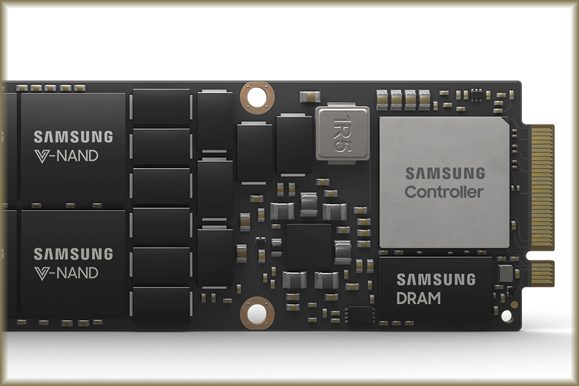 Solid-state storage drive capacities, in general, are simply amazing these days. For example, you can buy a 100TB SSD storage device from Nimbus Data, the ExaDrive, but it is used quite differently from an NVMe data center device.

Samsung’s is an 8TB SSD that has been optimized for data-intensive analytics and virtualization applications in next-generation data centers and enterprise server systems, the company said.

Get ready for some mind-numbing metrics. The new SSD is built with 16 of Samsung’s 512-gigabyte NAND packages, each stacked in 16 layers of 256 gigabit 3-bit V-NAND chips, achieving an 8TB density in an ultra-small footprint of 11cm x 3.05cm.

This is twice the capacity offered by the M.2 NVMe SSD (11cm x 2.2cm) commonly used in hyper-scale server designs and ultra-slim laptops. The NF1 SSD is expected to replace conventional 2.5-inch NVMe SSDs by enabling up to three times the system density in existing server infrastructure, allowing for a whopping 576TB of storage space in the latest 2U rack servers.

The NF1 SSD features a new high-performance controller that supports the NVMe 1.3 protocol and PCIe 4.0 interface, delivering sequential read speeds of 3,100 megabytes per second (MB/s) and write speeds of 2,000MB/s, Samsung said. These speeds are more than five times and three times that of a typical SATA SSD, respectively.

Random speeds have been recorded at 500,000 IOPS for read operations and 50,000 IOPS for writes. Utilizing the new NF1 storage solution, an enterprise server system can be expected to perform more than 1 million IOPS in a 2U rack space, significantly enhancing the return on investment for next-generation large-scale data centers. The SSD also includes a 12GB LPDDR4 DRAM to enable faster and more energy-efficient data processing, Samsung said.

To ensure long-term data reliability, the NF1 NVMe SSD has been designed with an endurance level of 1.3 drive write per day (DWPD), which guarantees writing an entire 8TB of data 1.3 times a day over its three-year warranty period, Samsung said.

Samsung said it plans to accompany its 256Gb 3-bit V-NAND-based SSD with a 512Gb version in the second half of this year to accommodate even faster processing for big data applications.