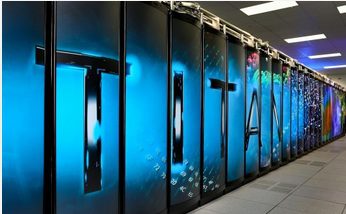 A new era of supercomputing was launched today with the debut of Oak Ridge National Laboratory’s (ORNL) Titan, a system capable of running through more than 20,000 trillion calculations each second (20 petaflops) by employing a family of thousands of Nvidia graphics processing units (GPUs), first created for computer gaming. According to the ORNL, it is the world’s most powerful supercomputer for open science, boasting a computing capacity on par with each of the world’s 7 billion people being able to carry out 3 million calculations per second.

Supported by the Department of Energy, Titan has more than 700 terabytes of memory. Titan will also occupy the same space as its Jaguar predecessor while using only marginally more electricity, thanks to the combination of central processing units (CPUs), the traditional foundation of high-performance computers, and more recent GPUs. Because they handle hundreds of calculations simultaneously, GPUs can go through many more than CPUs in a given time.

“One challenge in supercomputers today is power consumption,” Oak Ridge associate laboratory director for computing and computational sciences Jeff Nichols said in a statement. “Combining GPUs and CPUs in a single system requires less power than CPUs alone and is a responsible move toward lowering our carbon footprint. Titan will provide unprecedented computing power for research in energy, climate change, materials, and other disciplines to enable scientific leadership.”

The Cray XK7 system contains 18,688 nodes, with each holding a 16-core AMD Opteron 6274 processor and an Nvidia Tesla K20 GPU accelerator. Titan will enable researchers to run scientific calculations with greater speed and accuracy—the machine will provide research in energy, climate change, efficient engines, materials, and other disciplines– by relying on its 299,008 CPU cores to guide simulations and allowing the Nvidia GPUs to do the intensive calculations and processing.

“Titan will allow scientists to simulate physical systems more realistically and in far greater detail,” ORNL’s National Center for Computational Sciences director James Hack said in a statement. “The improvements in simulation fidelity will accelerate progress in a wide range of research areas such as alternative energy and energy efficiency, the identification and development of novel and useful materials, and the opportunity for more advanced climate projections.”

Among the flagship scientific applications on Titan are materials science, where Titan will allow researchers to improve the calculations of a material’s magnetic states as they vary by temperature, potentially unlocking major advances in technology, and combustion. Titan will allow researchers to model large-molecule hydrocarbon fuels such as the gasoline surrogate isooctane, commercially important oxygenated alcohols such as ethanol and butanol, and biofuel surrogates that blend methyl butanoate, methyl decanoate, and n-heptane, which could lead to the design of a high-efficiency, low-emission, optimally combined engine-fuel system.

In the area of climate change research, the Community Atmosphere Model–Spectral Element (CAM-SE), which simulates long-term global climate, will get a boost thanks to improved atmospheric modeling under Titan. These modeling improvements will help researchers better understand future air quality as well as the effect of particles suspended in the air. “As scientists are asked to answer not only whether the climate is changing but where and how, the workload for global climate models must grow dramatically,” CAM-SE team member Kate Evans of ORNL said in a statement. “Titan will help us address the complexity that will be required in such models.”